“Dashing Through the Snow In A One-Horse Open Sleigh”… Literally 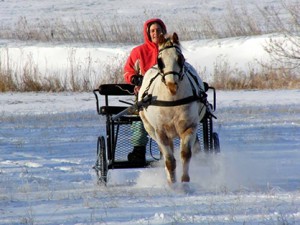 No matter where you’re located in the U.S., it’s a pretty safe bet that you’re facing some of this season’s arctic temperatures. While many horses are snuggled in cozily under multiple layers of warm clothing, others, like POA gelding KS’s Jammin To The Moon, are taking full advantage of the wintery weather.

Kathryn Schley of Austin, MN. recently took her 4-year-old gelding named “Buzz” out for some morning exercise in the freshly fallen snow. Although Buzz appears to be a talented, little driver, Schley doesn’t typically show in competitions. She and Buzz drive for their own personal enjoyment.

“I trained Buzz myself,” Schley says. “I’m not a professional trainer. We are just out exercising on a beautiful Minnesota winter morning and having fun in [my] video. It’s amazing that these little easy entry carts are able to just glide through the snow, provided that it is only up to 6″ deep.”

In the video posted to Schley’s Facebook page, Buzz appears to be having a ball bounding through the snow with his passenger in tow.

“This is a Kingston cart I’m using here with just the bicycle tires it originally came with,” she says. “We’ve been through a lot of different terrain. I would say mud is harder to cart through than the snow. With the snow and cold you just have to be careful for icy spots, which we do get a lot of here.”

“I would choose driving in the snow or [on] outside trails over arena driving. Going in circles can get boring for both Buzz and myself. We did compete in a futurity class a couple years ago, and I didn’t like the way the cart pulled in their sand.”

We’d like to see what other wintery activities you and your horse are participating in this season. Send your photos and videos to b.bevis@equinechronicle.com and they might be featured on our website or Facebook page.