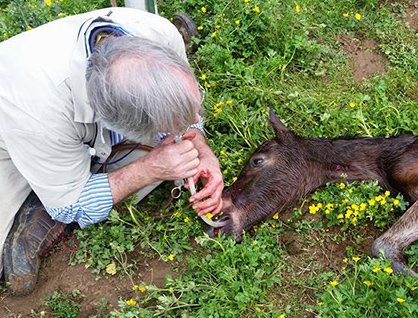 When Dr. Alan Dorton arrived on the scene at a Kentucky horse farm on April 28th, he knew immediately that something was terribly wrong. The mare he was treating had delivered a foal that wasn’t breathing. The telltale signs of a red, velvet-like placenta told him all he needed to know.

Immediately, Dr. Dorton administered mouth to snout resuscitation for ten minutes until tracheal intubation could be performed. Then, with the filly breathing somewhat on her own, she was loaded into the back of a pickup truck with an oxygen tank and raced to the hospital.

“I knew we had a very short window of time to get this foal out of the field and to a facility that had oxygen and the support needed to keep it alive,” Dr. Dorton says. “I had a limited amount of oxygen available on the farm. The oxygen tank could not inflate the foal’s lungs, so I ended up taking deep draws of oxygen from the tank and blowing into the foal to keep it alive. We ended up running out of oxygen about two miles from the hospital, but by that time it was breathing on its own, with occasional help from me.” 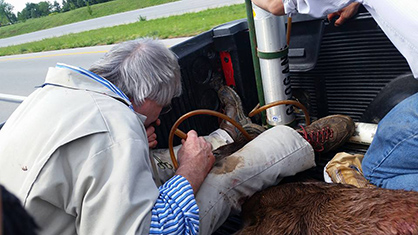 Dr. Dorton breathing for the foal, in the back of a pickup truck, on the way to the hospital. Image courtesy of Dr. Dorton.

What was the reason for the dramatic intervention? This was a dreaded red bag delivery. In order to understand what went wrong, it’s helpful to review a few basics about the equine reproductive system. The equine placenta is composed of two parts: the outer membrane called the chorioallantois, which is attached to the uterus, and the inner membrane called the amnion, which surrounds the foal. According to veterinary experts, “premature separation of the placenta accounts for up to 5-10% of all cases of abortion, stillbirth, and perinatal death,” (McCue, M. Patrick. “RED BAG- A Foaling Emergency.” Colorado State University Equine Reproduction Laboratory. n.d. Web. 2 May 2016.)

Dr. Dorton explains that the premature separation of the placenta from the uterus creates a dire situation because it eliminates the foal’s source of oxygen. “Normally, the mare goes into labor, the placenta tears at the cervical star (where it opens into the birth canal), the amnion (the white sack that contains the foal) starts to protrude out of the mare, and the delivery proceeds normally,” Dr. Dorton says. “The foal comes out; then, in the next few minutes to few hours, the placenta releases from the uterus and is delivered.”

“In a red bag delivery, the placenta separates from the uterus quickly, before the foal is delivered. The first indication of labor is the red, velvet appearing placenta, the ‘red bag,’ which is presented first. This is a signal to the foaling personnel that the delivery is not proceeding as normal, and intervention is needed, since the foal is now without a source of oxygen supplied by the attachment of the placenta to the uterus.”

Obviously, a lack of oxygen, or anoxia, for too long of a period of time can have severe and sometimes deadly effects. Dr. Dorton knew he had to act quickly, so he began mouth to snout resuscitation. He explains how this procedure can be attempted by a horse owner until a qualified veterinarian arrives. 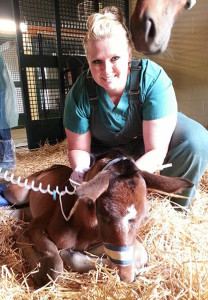 Dr. Stacy Thacker with the foal in recovery at the hospital. Image courtesy of Dr. Dorton.

“Pick up the foal, which is lying on its side with its head extended, by the muzzle at a 30 to 45 degree angle to the ground,” he says. “Hold the mouth and lower nostril closed. Open the upper nostril, and make a firm seal with your lips and the open nostril. Blow forcefully into the nostril, watching the chest as you do so to make sure that the air is going into the lungs, not the stomach. If the chest isn’t rising and filling up, the neck and head are not extended enough. It sounds gross, but you have to be ready to do what’s necessary.”

Besides a lack of oxygen, another major risk associated with a red bag delivery is sepsis, which is always a problem when something  goes wrong with a delivery. That’s why the foal Dr. Dorton treated is currently on intravenous antibiotics, and its blood values are being monitored daily for signs of infection.

“The major problems are all related to the anoxia, especially dummy foal syndrome, which is a brain issue,” he says. “Most vets think it’s a brain swelling issue with dummies, but I think it’s more of a metabolic problem with the brain itself, not an edema issue.”

“This foal was placed into a controlled coma for 24 hours by the hospital staff, so that the brain could start to reconnect. Then, it was slowly wakened and given supportive care.”

There aren’t many risks to the mare during a red bag delivery, besides the usual possibilities of bruising, vaginal tearing, etc., which typically depend on the size of the foal being delivered. As far as Dr. Dorton is aware, there isn’t any risk to future pregnancies following a delivery of this kind. 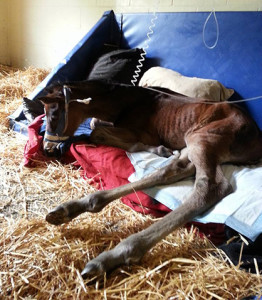 Taking a little nap after a hard day. Image courtesy of Dr. Dorton.

Unfortunately, there isn’t much a horse owner can do to prevent this type of situation. Recognition and early intervention are the two most important factors to foal survival. “Vigilance is the only thing you can do; there are usually no early signs of this happening,” he says. “Getting the foal out of the uterus and getting it breathing is the only thing you can do.”

Dr. Dorton remembers another experience with a red bag delivery, when he instructed a client on how to deal with the situation, over the phone. “I was sitting in the waiting room of my own doctor when I got a call from another client who was just finding a red bag foal,” he says. “I talked her through the steps of what to do to get the foal out and breathing. I didn’t notice that everyone in the room was listening until afterwards; I got some funny looks. Later, the doctor asked me, ‘did you deliver a foal in my waiting room? That’s definitely a first!’ I got a kick out of that.”

Meanwhile, you’re all probably wondering how the foal Dr. Dorton treated is doing. “The foal can stand without support now, is trying to figure out how to nurse, and is getting stronger all the time. I expect it to go home in the next couple days.” 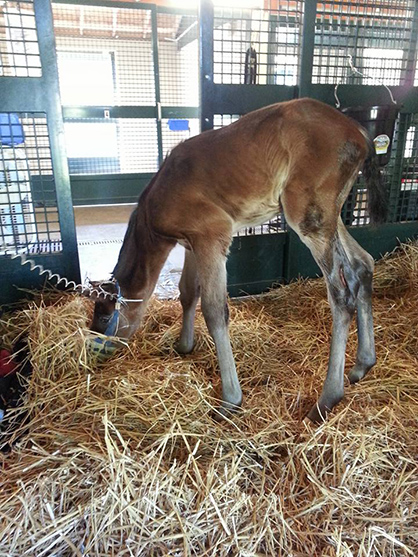 While he can’t tell us her name, he did let us know that she is a Thoroughbred filly by a Kentucky Derby winner! With the timing of this lucky, little filly’s birth, just a few days before the Kentucky Oaks and Kentucky Derby this weekend, we’re certain she has a bright future ahead!

Who can come up with a registered name suggestion… We think Dorton’s Darling has a nice ring to it!