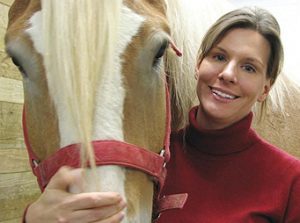 There is a cycle of aging that occurs in all species. As you get older, your body’s chemistry begins to change. When humans hit middle age, they find that their metabolism slows down, making it harder to lose weight and keep it off. The same can be said for the aging equine. When horses hit what’s considered to be middle age (8–18 years old) it’s not uncommon to see them become a little rounder in the midsection and act a bit sluggish, even when you think you’re providing a high quality nutrition plan. These horses may have developed equine metabolic syndrome, more commonly known as EMS.

Equine Metabolic Syndrome is a metabolic disorder characterized by insulin dysregulation (insulin resistance and exaggerated insulin responses to food) with horses that may be obese and/or develop laminitis. There are three main features of the disease: obesity or accumulation of fat deposits in certain areas, insulin resistance, and laminitis. However, diagnosis of EMS isn’t always black and white. For example, insulin resistance can be associated with Equine Cushing’s Disease; increased fat deposits can simply be associated with old age and weight gain; and a predisposition to laminitis can be connected to a number of causes, including traumatic events or illness. One of the most devastating effects of EMS is laminitis, or founder, wherein the digital laminae, or interconnected tissue between the coffin bone and hoof wall, is damaged. It is one of the most common causes of lameness in the country.

McCue and her associates at UM applied for their first grant to fund a project that she felt could make caring for these horses much easier. She says, “I was really interested in looking at the genetic aspect of this disease; because, I think, until then, those had pretty much been ignored. There’s a lot of focus on changing nutrition and exercise and how those things can impact the disease.” But McCue understands that every horse, just like every human, is different in how the body reacts to aging and weight gain. “You can look at horses that eat and exercise the exact same way, and they don’t all struggle with obesity and EMS,” she says.

The goal of this research is to develop a genetic test where a veterinarian could genotype a horse’s DNA, before it ever shows any signs of EMS, and predict the likelihood that horse will have a problem later in life. “The idea is that if we can identify animals that have a big genetic risk of developing EMS, then we can change the way we manage these animals early in life before they have any sort of overt signs of the disease,” McCue explains. The other benefit to this research may come by discovering the underlying genetic basis of the disease. Being able to dig all the way into the molecular mechanisms of the inner workings of the horse can help researchers identify places where drug therapies may work in a more specifically targeted regime.