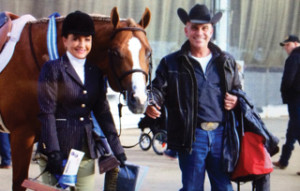 Stallion owner Sandra Morgan echoes a popular sentiment when she describes meeting her 16.1 hand, handsome hunk of a horse known as Mechanic. “I’ve always loved Mechanic since the first time I set eyes on him,” she says. “He’s very gelding-like: big, jolly, happy, slow-moving, and easy to be around. Also, he’s a ham for the crowd!”

Dry River Ranch Stallion Manager Stephen Stephens confirms the public’s fascination with the young AQHA stallion by Good Machine and out of Zippin Thru Town. “People can’t help but stop and look at him,” he says. “This horse is magnetic.”

Mechanic came onto the scene as a Western Pleasure futurity horse during his two year-old year and quickly proved he was no one-trick-pony. In addition to being named the Reserve Congress Champion in 2-Year-Old Non-Pro Limited Western Pleasure, he went on to place in the Top Ten in Junior Western Pleasure at the AQHA World Show as a three-year-old. That same year, he was named the High Point Western Pleasure Stallion in the nation. Then, Mechanic broadened his horizons winning Green Hunter Under Saddle at the 2014 Quarter Horse Congress.

“What’s amazing to me is his diversity,” Stephens says. “When you look at those horses that can cross over into different events, they’re usually a 7 Western horse and a 7 English horse. This horse is able to go out and not just do the events but also lead the nation. People talk about the maturity of a young horse that can go to the biggest shows we offer and be one of the top contenders. It’s very impressive.”

Stephens credits Mechanic’s success to his substance, style, and aesthetics. “Everyone is impressed with his size, and it’s not just height but width. He’s a voluptuous animal. I don’t know if this horse has a bad angle,” he says.

Mechanic’s striking looks and impressive conformation are gaining him fans, not only in the U.S., but also overseas. 2015 marked the first year he was available for European breeding, and the offering received a great response. “During this World Show season, we had six groups of Europeans come by. Every time I pulled him out of his stall, they exclaimed how big and beautiful he was. But, he’s also the humblest animal. He would be that kind of person who’s so good looking but doesn’t have any idea. There’s no arrogance to him.”

Just concluding his third year at stud, Mechanic’s oldest offspring will be yearlings in 2016. Both Stephens and Morgan are anxiously awaiting the foals’ debut in the Longe Line arena. Stephens feels Mechanic’s ability to pass on his conformation and physical maturity will be an asset as these young foals begin their show careers.

“Mechanic has a great big hock, just like his father, Good Machine, and that comes through on all of his babies. They all have enormous hind ends, and I’m very impressed with how strong their stifles are. These babies come out with huge, hearty stifles and they can stand up and lope right away on that hock. Every one of them is big, and it’s not just height but thickness. They’re developed and balanced,” he says.

Stephens continues, “I’ve done this for many years, starting with Dynamic Deluxe when he was eight, all the way until this point in my life, and I’ve never seen this kind of development early on in foals. Also, every one of those babies is pretty. I’ve not seen a bad-headed one in the bunch.”

Because of his size coupled with slow movement, Mechanic is proving to be an excellent cross on both Western and English-style mares. “Smooth Town is on Mechanic’s bottom side. He was one of the top stallions in the 70s with this huge, massive body. That older foundation is what we’re bringing forward. It’s the kind of body and strength that allows a horse to canter, lope, trot, jog and do it at the highest level, which is such a rarity,” Stephens says.

It’s not just the AQHA industry that’s taken notice of Mechanic. In 2015, the young sire bred 40+ APHA mares, many of which are multiple World Champion producers or champions in Western Pleasure and Hunter Under Saddle. “He has the size and all the characteristics to throw color for the Paint industry, so that’s a huge door that’s been opened. He fits all the bills and does so at the highest level.”

In some sort of kismet coincidence, the public’s response to Mechanic is akin to that of a late stallion that was very special to both Stephens and Morgan. Stephens states, “The only other stallion that I could see being this diverse was Good I Will Be, who would’ve been eleven this year. I remember just after we’d bought Good I Will Be and we were at the World Show getting ready for Western Riding. We were stalled right down the alley from Shane and Holt Pope’s stalls. You couldn’t help but stop and look at Mechanic. I looked at Sandra and said Mechanic is going to be Good I Will Be’s competition one day.”