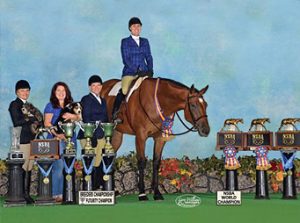 As the owner of Winning Couture, Debbie Hodde was busy working her booth at the Arizona Sun Circuit this winter while her trainer, Beth Case, was frantically trying to reach her by phone. After four missed calls, Case took it upon herself to run to Hodde’s booth and share the exciting news. Hodde’s horse, Couture Blue Genes, had been named the NSBA Horse of the Year.

“I had no idea,” she says. “I hadn’t been home to receive the letter from NSBA or had time to be on social media, because I was busy working my booth. All of a sudden, Beth ran up to me, all out of breath, and said, ‘Prescott was named NSBA Horse of the Year!’ I was in complete shock and disbelief,” Hodde says. Shortly after, Hodde’s phone was blowing up again – now with congratulatory texts and calls as the word spread.

What makes this achievement especially sweet for Hodde is that it came after a 10-year absence from major showing, as well as some major heartbreak. The last horse she was able to show at the Congress was Prescott’s grand dam, Blue Couture, as a three year-old. That mare earned multiple World and Congress Championships during her two- and three-year-old years. After that, Hodde began making plans to show Blue Couture’s offspring, All Blue Couture (Buzz) and Always Couture (Eli) in 2015, while settling Blue Couture into what she calls her “boutique breeding program.” The plan was a grand one. Hodde would show Buzz in three-year-old events at the Congress and Eli in the Masters. Sadly, an unexpected illness took Buzz’s life during the Congress before he ever set foot in the show pen. “Needless to say, I was devastated,” Hodde recalls.

Though her daughter continued to show at the Congress, and Hodde would occasionally show at smaller shows, she turned her attention to growing her business, which is named after Blue Couture. “I just waited to see that ‘special’ in one,” she says. Although the loss of Buzz was still fresh, Prescott–by Allocate Your Assets and out of Blue Couture’s daughter Only Blue Couture–made his entrance into the world and began piecing together Hodde’s broken heart. “Prescott definitely had that IT factor!” Hodde says.