Could a Light Mask Help Your Mare Cycle Early and Foal on Time? Your Show Horse Keep a Better Hair Coat? 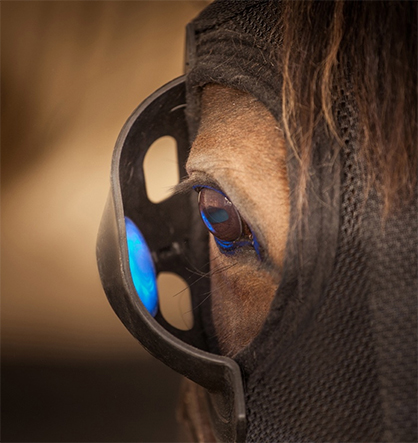 Innovative technology coming out of Ireland is quickly changing the way horse breeders approach the challenging task of managing a mare’s reproductive cycle. Dr. Barbara Murphy is the Chairman and Founder of Equilume Ltd. and the creator of the Equilume Light Mask™, an invention touted by a fellow vet as ‘the very best device that I have seen in 25 years of reproduction practice, second only to the introduction of the ultrasound.’-William T Gray, DVM, Gray Farms, California, USA

For centuries, horse breeders have relied on the technique of exposing a mare to more light (science recommends 16 hours of light per day) in order to speed along the onset of the first ovulation of the season. This is because most mares are seasonally polyestrous and start to cycle when the day length gets longer in the spring. The opposite, anestrus, is seen during winter when the hours of daylight are short.

Research has also shown that 8–10 weeks of increased light is required in order for a mare to respond (Merck Veterinary Manual, 2016). This often means broodmares, which are typically housed outdoors, are brought inside to live in stables under lights. The same is true of horses on the competition circuit. In an effort to retain a sleek, show coat, an owner will keep a horse under lights in order to trick the animal’s biological system into thinking it’s springtime, which encourages shedding and discourages excess hair growth.

“Having experienced firsthand how barren mares are managed in stables under lights for about three months each year in order to advance their breeding season, I asked the question, ‘How much light do they actually need?’” Murphy says. “For decades, horse breeders have been told that as long as you could read a newspaper in a stable then that was enough light for your mare, and she needed it for 16 hours a day. To me, that wasn’t informative enough about the quality and quantity of light needed. Having learned about how the light that enters the eye signals changes in the brain to influence reproductive hormones, and having heard that one-eyed mares also respond to light therapy, I wanted to know if light to one eye would do the trick.”

“The whole point being that broodmares would benefit greatly from being left in their natural environment. Increasing pasture time means they move more, have less fertility issues, and are less stressed. If we could show that light to one eye was effective at influencing the mare’s reproductive hormones enough for her to start cycling on time, then mobile lighting could be achieved and mares could be left out at pasture instead of stabled for three months and without impairing their vision.” 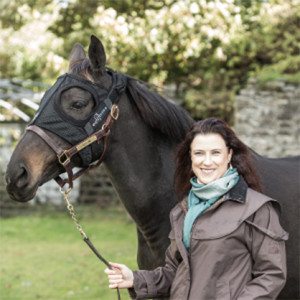 “Following my undergraduate degree in Equine Science from the University of Limerick in Ireland in 2000, I spent a year further exploring the equine industry and working for some high profile stud farms, including Stone Farm in Kentucky and Kildangan Stud in Ireland, as well as traveling to Australia and hitching a ride home on a shuttle stallion flight!” she says. Murphy then completed a PhD in Veterinary Science at the prestigious Gluck Equine Research Center where her research focused on Chronobiology – investigating how daily and seasonal changes in the light/dark cycle influence a horse’s physiology. Now, Murphy’s position at the University College Dublin as the Head of Equine Science and the coordinator of the Bachelor of Agricultural Science in Animal Science- Equine, affords her the opportunity to continue research in the field she loves.

Her creation of the Equilume Light Mask™ not only provides flexible outdoor/indoor living for broodmares, it also ensures consistent light during travel, mares that cycle early and foal on time with optimum birth weights, and coat conditioning for show horses. The Equilume Light Mask is unique because it’s an automated device that provides the optimum level of light to a single eye in order to successfully advance a mare’s breeding season. A light sensor in the mask ensures that the blue light only comes on when environmental light levels drop at dusk. When low light is detected, the blue light will turn on for the remainder of the 7-hour active period. If initially activated at 16:00 (4 pm) on the first day of light therapy, the light mask will automatically switch on each day at dusk and switch off at 23:00 every night.

The battery has a very long life and was designed for all weather conditions. The mask will provide precision blue light therapy for one entire season (5 months). Why use blue light? Murphy says it has to do with a hormone most mammals produce during the hours of darkness called melatonin.

“Light turns off this hormone, so as the days get longer in the spring, the longer hours of light reduce the duration that melatonin is produced,” she says. “During the long nights of winter, the higher levels of melatonin act to turn off a mare’s reproductive hormones. So, by providing long day length using artificial light, we can turn off melatonin and let the mare’s natural spring hormones kick in.”

Do horses mind having a blue light shine directly into their eyes? “We tested different intensities of blue light and found that we could use blue light that’s six times less intense than stable light and that melatonin would still be turned off. Our studies also showed that the blue light had no effect on the horse’s behavior. So, the development of a light mask for horses that provides mobile timed blue lighting meant that horses could still see and behave normally but could now be left out at night and/or travel with their light mask without interrupting their light regime.”

Thus far, the response from the horse industry has been very positive, Murphy says. “Getting people to try a new technology in an industry that’s steeped in tradition will always be hard, but that’s okay. We’re good at what we do in the horse industry because we’ve been doing it for a long time. It’s natural to be tentative about a technology that means you can manage your horses differently.”

“99% of those who have tried the Equilume Light Masks have been delighted with their results. We have received unsolicited endorsements from all corners of the industry. The technology works just as effectively as leaving mares under lights in the stable. There will always be mares that will not respond to any treatment, whether it’s delivered indoors or outdoors, and people must understand that using light is not going to ‘fix’ a fertility problem. It’s a management tool that allows horses to be more like horses and still meet the industry requirement for earlier foals.” 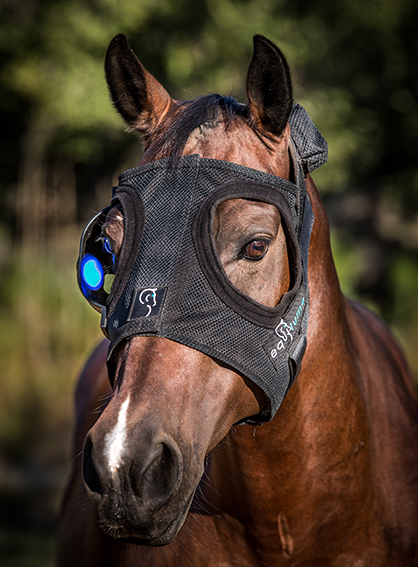 “We have been using Equilume masks on barren and maiden mares for the last three years, and the results have been fantastic! The mares cycle just as good as if they were boxed under lights, and pregnancy rates on first cover have also noticeably increased. The masks have become a big part of our breeding season preparation.”- Shane Wright, Manager, Yarraman Park Stud, AUS

“I really put the Equilume Light masks to the test last season at Haras du Quesnay, using them on maiden mares, older barren mares, and mares with a history of fertility issues. Nine out of the ten mares wearing the masks conceived on their first cover in February. They cycled well with no need for additional hormonal treatments and saved us on veterinary costs. I have no hesitation in recommending them for use in maiden or barren mares to ensure early reproductive activity. We will be using them again and encourage others to try this new technology.” – Vincent Rimaud, Manager, Haras du Quesnay, Deauville, France

“We used the Equilume Light Masks last season on a selection of our in-foal mares with a history of long gestation lengths. We found that the masks worked to good effect and resulted in a significant reduction in gestation lengths compared to the 2013 gestations in the same mares. We felt the light masks were effective at reducing prolonged gestations in pregnant mares and intend to use them again.”- Julian Dollar, General Manager, Newsells Park Stud, UK

Another benefit of light therapy is having mares that foal on time and deliver foals with optimum birth weights. Murphy recommends pregnant mares receive long day lengths for 70 days before their due dates, because this naturally turns on growth hormones that encourage the fetus to mature at the correct pace. “Our studies using the light mask show that optimum lighting provided to the pregnant mare in her final trimester reduces long gestations by, on average, 12 days. This is very important for breeders who are hoping to get their mares back in foal again in a timely manner. Improving foal birth weight is also crucially important for recipient mares carrying important foals.” 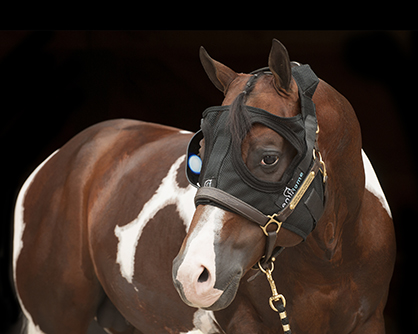 Yet another use of the Equilume Light Mask is in maintaining a sleek coat in show horses. Rigorous trials have been conducted and, in conjunction with a blanket, the light mask induces complete shedding of the winter coat in under six weeks.

“Long day length stimulates a spring hormone called prolactin,” Murphy says. “Prolactin, in conjunction with warmth, stimulates the growth of the sleek, summer coat. For horses maintained outdoors, without blankets, you will still see some coat shedding, but not to the same extent. We have received very positive feedback from the show horse industry that have used the light masks to keep the show coat condition. The great thing about it is the horse can travel to the shows with their mask on and not be impacted by poor lighting in show barns at night. We will be launching a specially designed rechargeable light mask for the show horse industry later this year, because so many trainers and riders expressed an interest in it.”

Chris Benedict, an AQHA, NRCHA, and NCHA judge uses the light mask for this purpose at DLR Ranch in Weatherford, TX. “We’ve used lights forever for show horses to keep slick coats. Last year, I used Equilume Light Masks on two of my geldings that both grow a lot of hair in the winter. Both shed out completely in about 30 days with the masks. I am sold! The masks were no trouble, didn’t rub and stayed on really easy. I look forward to using EquilumeTM Light Masks on my show horses this season.”