Competing With Your Rival, and Having Fun Doing it! 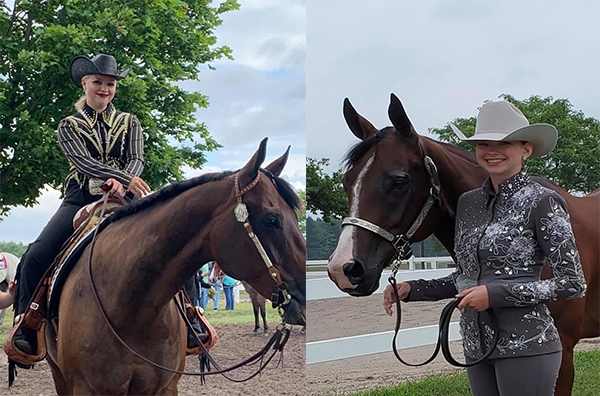 It goes without saying that the bond between a successful horse and rider team is one of the most special partnerships in sports. What makes this bond even more spectacular is when the team has had to overcome great adversity that left them wondering if they would ever get there in the first place. But what happens when there are two teams with this special bond and determination that are going toe to toe in competition all summer? Special friendships are made, points and awards are won, and two happy horses are dominating back in the arena, when no one was sure they would ever be able to step foot into the show arena sand again.

My Vintage Mercedes, aka “Vinny,” is a 2008 gelding by Vintage Version that was bred by Lisa Berreth of Gobles, Michigan. He was purchased as a two-year-old by Cyndi Pyle of Zeeland, Michigan. Cyndi and Vinny were a team for four years under the guidance of Greg Holstege of Infinity Pleasure Horses. Together, they qualified for the AQHA Select World Show and earned numerous all-around awards before he started to show signs of discomfort and irritation, as well as lameness. After several consultations with the vet, it was decided that he should be turned out to pasture in hopes he might heal enough to be comfortable in retirement. Cyndi was heartbroken, but took him home to pasture and crossed her fingers that he could stay comfortable. Vinny was diagnosed with a severe shoulder ligament injury, and only time would tell if he would ever be sound enough to ride, let alone show, again.

Flash forward two years and Delaney Bakker of Grand Haven, Michigan, enters the picture. After just losing her horse due to laminitis issues, she was unsure if she would ever step foot into the arena again either. Vinny had slowly been getting back to work after a rocky start, and it was determined that he would be sound enough ride again, but it would take a very special family to accept his injury history, his somewhat difficult demeanor, and the potential unknowns. Greg Holstege, along with Cyndi, who both knew Vinny best, felt like it might be a perfect match.

Delaney is a patient rider and wasn’t scared of a challenge and potential soundness issues. After all, it was all she ever knew in a show horse. It was a match made in heaven. With lessons, training, and routine vet care, under the guidance of Infinity Pleasure Horses, Delaney Bakker and My Vintage Mercedes have been among one of the most successful Michigan Quarter Horse Rookie and Level One Amateur teams in the pen this year. However, that’s not to be outdone by Morgan Letzkus and Jonny Diesel of Midland, MI, who also share an interesting story of overcoming adversity and challenges.

Johnny Diesel is a 2013 gelding by Diesel Only that was bred by Bandstra Quarter Horses. Johnny was purchased by Morgan three years ago as a rehab project when her trainer at the time, Kathy Netzley, thought Morgan might have what it took to bond with him. He was in Kathy’s pasture as a rehab project. He was angry, scared, and in pain. He barely let anyone near him; but, with a lot of patience and determination, Morgan slowly earned his trust. Johnny won’t let other people ride him or near him most days. But this team has also been dominating together their first year showing in AQHA competition. They’re now under the guidance of AQHA Professional Horsewoman, Christa Baldwin. It appears Johnny’s injury is mostly mental from prior suspected abuse from a former owner, but he trusts Morgan, and together they had a very successful summer.

At every Michigan Quarter Horse Association show but one, either Morgan or Delaney have taken home the Rookie Amateur All Around title. Currently, Delaney is leading the Rookie Amateur All Around race in Michigan, but the title has exchanged hands between she and Morgan several times throughout the season. Delaney is also the Reserve Level One All Around Amateur for the Michigan Quarter Horse Association.

“I wasn’t sure I was ever going to be able to show again, let alone be this successful,” Delaney says. “But showing and sharing this with Morgan has been amazing. She’s such a nice girl. It’s been fun!”

Morgan echoes the sentiment, “This year has been a dream come true!”

Both girls are competing in their first year on the AQHA circuit, and showing successfully, on horses with a future that was unknown just a few years ago. These are two horses that had the heart to be successful show horses once again, but their history made for so much uncertainty.

If you watch these girls compete, it’s so obvious that they love their equine partners, and their partners trust them fully. Delaney and Morgan are the sweetest girls, clapping for each other’s success, sharing laughs, and creating memories that will surely last a lifetime. These are memories neither of them were sure would ever be theirs to make.

If you have a great story to share with The Equine Chronicle, email B.Bevis@EquineChronicle.com.