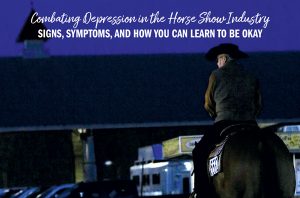 She walked to the outdoor pen, thinking she could calm her heart and dry her tears. She needed a quiet moment to herself. An assistant trainer to one of the leading performance trainers in the industry, her goal was to work hard, ride well, learn, and become one of the greats. Somewhere along the way, the minor stresses became harder to overcome on a daily basis. She couldn’t sleep, couldn’t eat, and struggled to get out of bed each morning, even when she told herself she was living her dream.

If he had asked, she would’ve explained that she had been diagnosed with depression and anxiety. Try as she might, those feelings of helplessness, listlessness, and fear were at times almost impossible to ignore.

She eventually dried her tears and continued on. She tried to overcome the dark thoughts like running the truck and trailer off the road to end it all and wondering what it would feel like to be injured severely enough to have the opportunity to lie in a hospital bed for a few months so she could rest.

She was lucky that a friend recognized her pain and helped connect her with a psychologist. She learned to compartmentalize her feelings, her fears, and her worries. She learned how to take her perceived weaknesses and turn them into strengths.

Somewhere along the way, we were told to “tough it out” and “suck it up,” because it’s the “cowboy way.” The horseman’s way of life is an all-consuming living to which many gravitate. The culture consists of the grittiest, most resilient, and toughest individuals we know. Why? Because we’re more than average. We’re more than horse people. We’re horse show people. That means we’re not, under any circumstances, weak. We don’t struggle–and if we do, we shrug it off. There is no other option.