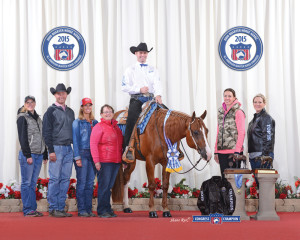 In October 2015, 20-year-old Cody Parrish achieved a career milestone besting numerous top professionals by being crowned the Congress Champion in Green Western Riding. Cody and Invest With The Best, owned by Debbie Hill, earned a score of 224.5 for the win.

The fact that it was Cody’s first Congress win as a professional horse trainer added luster to an already exciting year of firsts, including a win at the Fun in the Sun Extravaganza in Venice, Florida and at major futurities like The Show for Dough and The Little Futurity. Cody recalls the win fondly, “Winning the tie breaker in Green Western Riding at the Congress was an unbelievable experience for me. Being able to compete at that level with a horse that I trained has been something that I’ve always dreamt about. I have tons of respect for Mrs. Leslie Lange [Reserve Champion], who I consider to be an outstanding horsewoman. To be able to share that with her was really a milestone for me. I believe it’s really going to give me a lot of confidence going forward, and hopefully I can keep that rolling.”

Cody’s modesty is evident when he describes what these wins mean to him. “Honestly, I’m not sure which win I feel is more memorable. Obviously, being fortunate enough to win the Youth World was really a blessing to me, but being able to win the Green Western Riding at the Congress was also special because it was a little outside the box. I’m just so thankful for each and every one [win], because there are a lot of people who work hard their whole lives but will never be given the opportunities that I’ve been given. That’s something I never want to take for granted.”

This accomplished young man is quick to point out that his family has played a major role in his success, which he deeply appreciates. He says, “It has truly been a blessing to grow up in a family that loves horses and to have been involved in the industry since I was born. Both sides of my family have been actively involved in the horse world for a long time, so there’s no doubt that I was born to do the same. Since I can remember, all I’ve ever wanted to be was a cowboy. It’s really what I love to do, and that’s what drives me to strive to become a better horseman.”

Growing up surrounded by world-class horses, both trained and shown by his parents and grandparents, Cody learned from the generations before him. “My parents and grandparents have been a huge inspiration to me in my career so far. I’ve always used the methods for training that my parents have, and I really appreciate the years of work they both put into their horses. Not only have they helped me master their way of doing things, but they both have really pushed me to think outside the box and explore new ways of training.”

Like many young, successful competitors, Cody spent hours on the rail watching other trainers and absorbing knowledge. He says, “I always try to learn pieces of as many different people’s programs as possible. I believe you can learn something from everyone, so I make an effort to be open-minded and observant.”

His win at the Congress in 2015 was even sweeter because he personally trained Invest With The Best, aka “Taylor.” This was also his first foray into Western Riding, after years of success in Western Pleasure. Although he was competing in a new discipline, Cody’s work ethic, natural talent, and ability to understand his horse and form a bond paid off. He believes self-carriage and rhythm are key attributes in a Western Pleasure prospect as well as a Western Riding horse. He explains, “In my opinion, a good Western Pleasure horse is supposed to make his job look easy and enjoyable. To do so, each gait should be as effortless as possible. While correct mechanics are also very important, the horse with a lot of self-carriage that can make the job look easy is often the most successful show horse.” 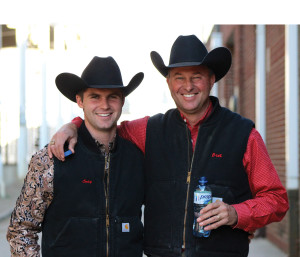 From watching his parents, Cody has learned the value of time and patience when starting a young prospect. He also believes in the importance of taking a long view of a horse’s career instead of forcing a horse into a role it’s not physically or mentally capable of, simply to achieve quick results. The key, he says, is to understand a horse’s physical attributes and learning style and to balance that with the pressure to produce peak performance at important shows. “Knowing when to push and when to back off is very important,” he says. “Sometimes this can be extremely difficult to do because of the pressures and time frames that are placed on us as trainers. A truly broke horse that was allowed to mature at his own pace will tend to stay on top of his game and have additional longevity in his career.”

While juggling school, friends, and horses, Cody plans to continue the family legacy by working with his parents while he attends college at Valdosta State University, earning a degree in Business Management. He approaches the challenge of time management with mature pragmatism, saying, “It’s definitely a commitment when you decide to do the horses professionally, and that has meant I’ve had to make sacrifices. I really don’t have very much free time, but when you love something like I do, then you really don’t see it as much of a sacrifice. You learn to manage your time and make it all work as you go.”

Cody’s plans for the future include graduating from Valdosta State while helping his parents and building his own training business on the family farm. He will be back in the show ring in Western Riding, but hopes to branch out and take on new challenges, with promising young prospects he has in training.

To find balance in his life, Cody enjoys sports, hunting, and going to the lake with his brother, Chase. He’s also a dedicated fan of Chase’s football team. “We spend every Friday night at his games. I’ve really enjoyed watching him get to live his dream and be successful, because he puts as much time and effort into it as we do with the horses,” he says.

Cody is on the go 24-7, but this up-and-coming young professional wouldn’t have it any other way. He is grateful to his parents, family, friends, and loyal clients who have been part of his exciting journey to the top of the show world. “It’s easy to get caught up in our game and forget about the things that are really important in life, but there’s no doubt we are truly blessed,” he says. “I have a wonderful family, great friends, and I get to live my dream every single day. God is Good!”

For more information on

Cody Parrish and Parrish Quarter Horses, visit them at