Chris and Melissa Jones – A Lifelong Passion for Horses 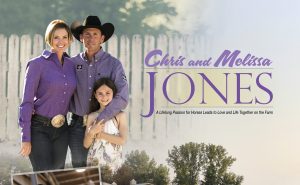 Chris Jones was just seven years old when a horse first entered his life thanks to his older sister’s insistent pestering of their parents. A couple of years later, after getting enough of a taste of horses to spark a flame inside his own heart, Chris received a two-year-old Quarter Horse named Joe Leo’s Babe to call his own. The family participated in local open and 4-H shows, and the hobby occupied most of their summers.

Meanwhile, literally half a world away in Australia, Melissa White was also growing up in the saddle. Melissa’s mother raised and showed Appaloosas, so Melissa was in the show pen as a tiny tot, first in the local pony club and then aboard Appaloosas as she got older. Upon graduation from high school, Melissa decided she wanted to blaze her own trail and experience the horse industry in the United States, so she boarded a plane bound for Texas. She spent the next three years working for John Dean in Tioga.

Melissa eventually moved to West Palm Beach, Florida, to work at Pinetree Quarter Horses. At the same time, Chris was working for Roberts Quarter Horses in Reddick, Florida. Their paths would eventually cross in 2000 at a horse show when Chris enlisted the help of his friend, Mike Hawkins, to assist him in “doing some research” on the pretty, hazel-eyed Aussie. Chris invited Melissa out for dinner and drinks that night and “the rest is history,” he says. The couple celebrated 18 years of marriage last month.

Both Chris and Melissa had worked for a variety of trainers before starting Jones Performance Horses just after their marriage. The pair was ready to venture out on their own, so Chris contacted a man named Jim Rohrer who owned a Cutting horse barn in Vincennes, Indiana, and for whom Chris had worked in college. When Chris called to inquire as to whether his barn was available, Rohrer more than welcomed the couple with open arms. “We were there for six years, and he never charged a penny for rent. He wouldn’t let us pay for anything – not even the light bill! He was just a great guy, and we wouldn’t have gotten such a good start without him,” Chris recalls.

In 2007, the Jones built their own facility from the ground up in Reelsville, Indiana. Situated on 18 acres and backed up to a beautiful lake, the facility has 18 stalls, a large outdoor arena, a 80 x 120 indoor arena that helps them weather Indiana’s four seasons, turnouts for yearlings and babies, and more. “We really feel a sense of pride when we drive in the driveway,” Chris says. “It was a project we completed together, so it’s special just for that reason.”

Their lengthy waiting list is a testament to the Jones’s hard-built reputation of honest business practices, open communication and, most importantly, their customer-first philosophy of service.