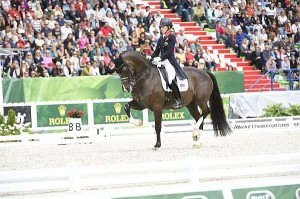 World Gold for Dujardin and Valegro

Double Olympic Champions Charlotte Dujardin and Valegro added a World Champion title to their collection by taking Gold in the Dressage Grand Prix Special Individual competition with an outstanding performance on a score of 86.120%, the highest ever score recorded by a horse and rider at the World Equestrian Games.

In a closely fought contest, Dujardin held on to Gold after a superb test from Germany’s Helen Langehanenberg riding Damon Hill NRW, who finished in Silver on her score of 84.468%.

“It was a great ride, and I was very happy with my test. I had no team members to worry about; I thought I’d just go for everything. My horse was just fantastic – he is a Ferrari! The crowd was very hard to deal with – all I could hear were gasps, whether I did a good or a bad thing. I could hear the crowd the whole time.”

“The test felt very good. He always goes forward and listens very well. He is keen on working with me and knows what to do. I did not know Charlotte’s score before I went into the stadium. I was just concentrating on my preparation and test. I am really looking forward to Friday now – he is a very happy horse!”

“I am really happy. Coming in to these Games, I was only focused on Team Gold. I had no thoughts for the Individual at all. This is just fantastic, completely fantastic! My horse was perfect in the test, even if during the passages he lost some rhythm and he has to be more energetic. I had a really fantastic feeling during the whole test.” 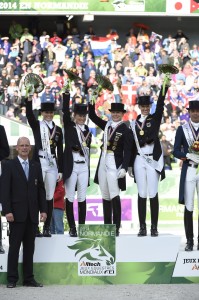 On Tuesday, Isabell Werth took her seventh Gold medal for Germany in the Team Dressage riding her mare Bella Rose 2, with a fantastic test and score of 81.529. Werth was third to go for Germany and her brilliant ride helped secure Germany their 11th Dressage gold medal success since the team competition was introduced into the World Championship program in 1996. Great Britain took the Silver medal and defending champions The Netherlands took Bronze.

Rolex and the World Equestrian Games

The exceptional bond between Rolex and the World Equestrian Games has no doubt been instrumental in attracting 12 new countries to make their debut this year, a glorious achievement in the development of the sport on a global scale. Across the 15 days, approximately 1,200 media will follow 1,000 competitors as they compete across eight official disciplines including the Olympic sports of Show Jumping, Dressage and Eventing in front of over 500,000 spectators.