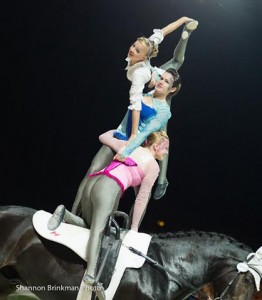 After completing the Compulsory Test on September 2 at the Zenith venue in the city of Caen, the squad was holding 12th place heading into the Freestyle. Their emotional depiction of the good and evil storyline of Sleeping Beauty brought their first round total to 6.783 for 10th place – qualifying them to move on as part of the top 12 squads heading into the round two Freestyle that will determine Team Medals on September 5.

In addition to their exciting results, the Canadian Vaulters made history in Normandy, as it marked the first time Canada has ever had a full squad compete at the FEI World Equestrian Games. The squad was made up of six vaulters, all hailing from Alberta. Head Coach and team member, Todd Griffiths from Cardston, AB was joined by Olds, AB natives, Haigen Pavan, Shianne Hofer, and sisters, Angelique and Jeanine van der Sluijs. Rounding out the team in the ‘flier’ position was Dallyn Shields of Didsbury, AB.

“I’m ecstatic because there were so many parts that had to come together to make this happen. It was a huge group effort, so this is just a culmination of a massive amount of effort from a massive amount of people,” explained Griffiths, who is attending his third FEI World Equestrian Games, having previously represented the United States before obtaining Canadian citizenship in 2014. “I’m so thrilled that it came together today at the World Championships. I couldn’t be more pleased.”

Griffiths was grateful to Becca Hewit of Great Britain for stepping in as Lunger for the Canadian Squad, as well as leasing Bankey Moon, her eight-year-old Irish Sport Horse gelding, to the Canadians for the Games. He also thanked American choreographer, Kalyn Geisler for creating Team Canada’s freestyle.

“Kalyn built this entire team freestyle. She built our music, she built our costumes – she did everything to help us get the pieces to come together,” explained Griffiths, who was portraying the Prince. Pavan took on the role of the crow, with Hofer and Jeanine as fairies, Shields as Aurora, and Angelique transforming into Maleficent.

Throughout the freestyle, up to three vaulters were performing on the horse at once, achieving daring moves that blended the balance and athleticism-type movements of gymnastics with the crowd-pleasing lifts of figure skating.

“This group of people who were once individuals are now a team, and it is really cool to see everyone come together and really work so hard to do what we just did in there today,” said Pavan, a two-time Canadian National Mens Champion in Vaulting who was attending his inaugural Games. “It was just an incredible experience to run in and have that adrenaline going through your body.”

Chef d’Equipe, Rebecca Marland added, “For the squad to move forward to round two is honestly a dream come true. It’s the first time Canada has ever put together a squad, and we do that well? Words fail me. It’s absolutely wonderful, and I’m so proud of this team. What a journey!” 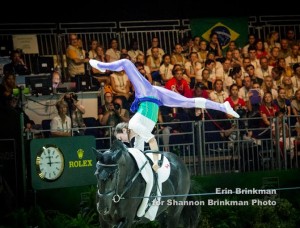 The top Canadian Individual Female was Jeanine van der Sluijs, who went from depicting a fairy in the squad freestyle to portraying Esmerelda from the musical Notre-Dame de Paris. She earned a total round one score of 7.301 to finish the FEI World Female Individual Vaulting Championship in 23rd position – just outside of the top 15 invited forward to round two, which features an additional Technical Test before wrapping up with a Freestyle to determine the medal winners on September 5.

“I took the music from the really heavy part where Esmerelda dies and they sing about, ‘To die for you is not to die.’ So it’s emotional and very strong. I really love that piece of music and I wanted to portray that,” said Jeanine, who was also the top placed Canadian individual at the 2010 Games in Kentucky, USA. “It felt really good in there today. The energy was really good. I hit all the moves that I’ve been working towards, so I was very pleased.” 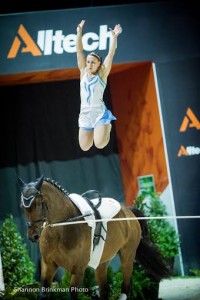 Alisa Schmidt of Chilliwack, BC came into the freestyle in 31st position after scoring 6.318 for her Compulsory Test on September 2. Despite an unfortunate slip off the horse mid-way through her performance, she executed numerous beautiful, yet technical moves to end on a round one total of 6.228 to keep 32nd place.

“My music is a traditional Christmas song in Latin, done by Enya. It’s about the return of Christ, and the longing and waiting for him to come back. So, it’s a very passionate song for me to use, which makes it very easy to do expression and choreography. It’s just beautiful and easy to move to,” explained Schmidt, who was competing in her third consecutive FEI World Equestrian Games. “I’m happy with it. The slip-off was unfortunate, but overall I’m happy with how the horse went, and happy with the overall experience. I can’t wait to do it again.”

Leading the pack into the final Squad Freestyle is Germany, with Switzerland following in second, and Austria holding third.

To view complete results, plus get all the latest news from the Alltech FEI World Equestrian Games 2014, visit www.normandy2014.com.

For a full guide on the Canadian Equestrian Team, go to www.equinecanada.ca/cet.

Live broadcasts of the Alltech FEI World Equestrian Games 2014 can be viewed on the FEI TV website.