BSB R11 Quarter Horses – The Proof is in the Kids

March 8, 2014 | Filed under: Current Articles,Editorial,Featured | Posted by: Alex A. 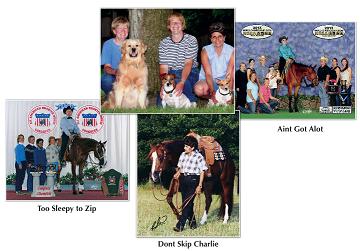 Those words have been said about many families, but they perfectly describe the attitude toward the horses and the ethos of business practices at BSB R11 Quarter Horses in Sturgis, Michigan. The fifty-acre farm is home to stallions, mares, and foals that reside under the loving and watchful care of three consummate horsewomen, Hedy Levin, Shelley Donovan, and Kim Rotenberry. “The girls,” as they are affectionately known in the industry, have been producing world-class show horses for 25 years and show no signs of slowing down. The ranch’s name, BSB R11, comes from Shelley’s family farm, BSB (Bob, Shelley, Barb), and Hedy’s farm, R11 Ranch (named for her parents, Renee and Ralph). Kim went to work for R11 Ranch in 1988, and the two farms were combined in 1995. Together, these dedicated horsewomen embarked on a journey that would produce some of the most influential horses in Quarter Horse history.

Between Hedy and Shelley, there are fifty years of combined AQHA breeding experience. Over time, they have bred babies that have accumulated over 20,000 AQHA points, almost $750,000 in AQHA, NSBA, and World Show earnings, and hundreds of ROM and Superior titles. They have produced ten AQHA World Champions, four Reserve World Champions, and 23 APHA World and/or Reserve World Champions. Their accomplishments also include NSBA Hall of Fame Breeding horses Don’t Skip Charlie, Zippo Jack Bar, and Goddess of Love and NSBA Hall of Fame Show Horse, He’s Just To Sharp, who was bred and raised by the girls.

All three partners have experience in the horse industry that goes back to their childhoods. Hedy grew up in Michigan where her family hauled horses with Tommy and Chris Manion. She was in the show ring by the age of six, riding hunters, before switching over to western disciplines. She remembers Mr. Eagan, Fred Robinson, Mike Havens, and Dianne Eppers as some of her greatest influences.

Kim was raised in Warrenton, Virginia, where her family raised Quarter Horses. She was in the show ring by the age of five and progressed quickly through 4-H to AQHYA events. She then spent time working for Bowed Creek Ranch in Texas as well as for Tommy Manion. She recalls getting a first-class education in Quarter Horse bloodlines and breeding from Pete Bowling and Betsy Tuckey. “I remember, when I was young, they had a breeding farm that did cutting horses and show horses,” Kim says. “I was so intrigued with the way they could rattle off Quarter Horse bloodlines so easily. I learned an awful lot from them about breeding horses.”

Shelley, who grew up just outside Detroit, also started riding as a child. Her family kept horses at Sugar Bush Stables. Her prior horse experience included working with Carl and Carol Lang, who rehabilitated racehorses. While working with the couple, she gained valuable experience in hands-on horse work. Shelley got into the breeding business with her father and focused on halter and western pleasure lines including Impressive, Zippo Pine Bar, Mr Conclusion, Im A Big Leaguer, and Hotrodders Jet Set. She also continued competing and working with Jim Bryce, Troy Oakley, Jeff Long, Doug Pratt, and Wayne and Judy Davis along the way. For many years, she kept her mares at Carrie Chown’s ranch in Pilot Point, Texas. Working with Carrie, she learned valuable lessons in customer service and how mares and foals should be taken care of. Her personal titles include multiple Congress Championships, Reserve Championships, Futurity Championships, NSBA Championships, and a NSBA High Point Non-Pro Rider title.

The three women met through horses. Kim describes their business approach in modest terms. “We are all very honest people who would give you the shirt off our back. People know we can be counted on to help anybody. We will still do business on a handshake, and our word is good. Sure, you get burned once in a while, but we came up through the old school of honest, hard-working horsemen. Integrity is very important to us.” Shelley and Kim can be found on the road throughout show season while Hedy, “the homebody,” according to Kim, oversees the daily routine of the mares and foals at the farm. All three share a true love of horses and pride in the BSB R11name.

Their foundation line of mares was derived from Hedy’s ten show mares that the group first began with nearly 25 years ago. Kim says, “With breeding, there are no shortcuts. We’re not just looking at the stud for breeding. We’re looking at the whole family of horses. The first Zippo Jack Bar baby that we raised and showed, Zip In Delight, was out of one of Hedy’s mares that was a World Champion and Congress Champion that Tommy Manion had showed. We started with known, quality bloodlines, and Zip In Delight was proof that we were doing this right. When you rode Zip In Delight, it was true that the proof was in the kids, and that’s been our motto ever since. We’re now breeding her granddaughter, Lope In My Boots, so we’ve come full circle.”

Among the hundreds of horses that are part of the BSB family, one stallion holds a special place at the farm. “Too Sleepy To Zip is one of the best I’ve ever seen,” Kim says. Although he had a rough start in life, the orphan foal by Zippo Jack Bar and out of To Sleepy Too went on to win a 2002 Congress Championship in western pleasure, earn a top ten at the 2002 AQHA World Show as a two-year old, and showed in hunter under saddle. Kim says, “Growing up in Virginia, I knew his mare line, so we know his family history. Honestly, when we just look at him, we thank God for such an amazing horse. He is exceptionally well put-together, he’s athletic, and he’s the kind of horse that would follow you into the house. He’s the whole package, and he passes that along to his offspring.”

Kim recalls the dramatic entrance this exceptional colt made into their life. “His dam belonged to our friend, Sue Berry, who wanted her to foal out at home. Sadly, the mare died shortly after giving birth on Sue’s farm. I drove two hours to see him as soon as I got the call that he’d been born. The minute I saw him, the hair on the back of my neck stood up. Even at that young age, I could see he was something very special. We’ve had some great horses, but this colt has turned out to be one of those once-in-a-lifetime horses.” The team scrambled to find a nurse mare for the orphan foal and bottle-fed him for two days before the arrival of Ernestine Will Buck, who took the little guy under her wing. “She was as ugly as a mud fence,” recalls Kim. “But she was a wonderful nurse mare and he adored her, so we nicknamed him Ernie.”

Ernie has proven to be as successful in the breeding barn as he was in the show pen. He’s a multiple World Champion sire in the AQHA, ApHC, and APHA, an AQHA Leading Sire, and an Equistat Leading Sire. Ernie is just one of the distinguished stallions standing at BSB R11. 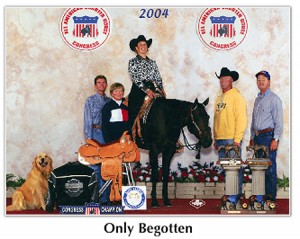 The BSB recipe for success has produced exceptional horses. One gelding, Aint Gota Lot, was sold to Bauer-Gooding Show Horses, who showed him to multiple futurity wins as a two-year-old and three-year-old. Following that success, he was sold to Pam Bilek, who will keep him under the guidance of Highpoint Performance Horses in Pilot Point, Texas. Aint Gota Lot was shown by Beth Case at the Arizona Sun Circuit and was Circuit Champion in Green Hunter Under Saddle and Junior Hunter Under Saddle. He’s now starting his career in Trail and Western Riding with Jason Martin in the saddle. Kim says, “Our teamwork with Bauer-Gooding is producing exceptional horses that can win in the show pen and go on to have long careers.”

Charlie Hilfiger, by Don’t Skip Charlie and out of Rancholm Delight, is another multiple champion stallion standing at the farm. He was raised by the girls and sold to Bauer-Gooding Show Horses, which is comprised of Garth, Sonnesa, and Austin Gooding and Michelle and Sheila Bauer. They bought the stallion two years ago from Carefree Ranch, who also stood him at BSB R11. Bauer-Gooding has continued that arrangement because of the honest, straightforward way BSB R11 does business and the exceptional care the horses receive at the farm. Garth says, “We’ve known Shelley and Kim for a long time. The girls, as everyone calls them, have been great to work with. They’ve always been very honest in the dealings we’ve had. We consider them part of our team and our family, really.”

In addition to Too Sleepy To Zip and Charlie Hilfiger, the farm also stands two other multiple champion stallions. Gota Lota Potential, owned by Richard and Betty Carr, is a sire of multiple World Champions in Western Pleasure and Hunter Under Saddle. Chocolatey, owned by Noelle Schmidt and Blue Chip Stallion, LLC, is a World Champion and World Champion sire in Appaloosa and NSBA events. Kim says, “We have a stallion for everybody. We have you covered, no matter what your needs are.”

While the 70 stalls at BSB are in high demand, the girls welcome mares for their breeding and foaling out services. They have many weanlings and yearlings for sale, and they are expecting 50 foals this year. Kim says, “We’re out straight, 24/7, from January to the end of June, but we love it. We’re all very passionate about what we do. Even when you’ve had a long week or a tough day, being able to help a mare through the foaling process is something special. When you see that baby for the first time and smell that wonderful smell of a newborn foal, it’s still very special to all of us even after all these years.” They know each horse by name and use the best products for their care. “Purina Strategy, good alfalfa hay, Equine Mega Omega, and Stablyx are all part of our recipe for success,” says Kim.

Lest anyone think it’s all for the joy of cute baby horses, Kim is quick to point out that their success has come at a price. “We haven’t had a vacation in, well, ever. All three of us work very hard to make a go of this. Once in a while, Shelley and I get out to play a round of golf, but that’s about it. For us, the joy is in seeing our horses go out into the world and do well. We girls have to put on lots of hats in one day. If it has to get done, it gets done. We don’t whine or complain; we just do what we have to do.”

Kim speaks for all the girls when she says, “We just want to say thank you to all of our customers. Hearing from owners who are having success and doing well makes it all worthwhile. People know we can be trusted and that our horses will be the same, no matter where they are, because we always produce the same type of horse, one that’s honest, well-bred, and built for horsemen. We let our horses speak for themselves, because the proof is in the kids.”