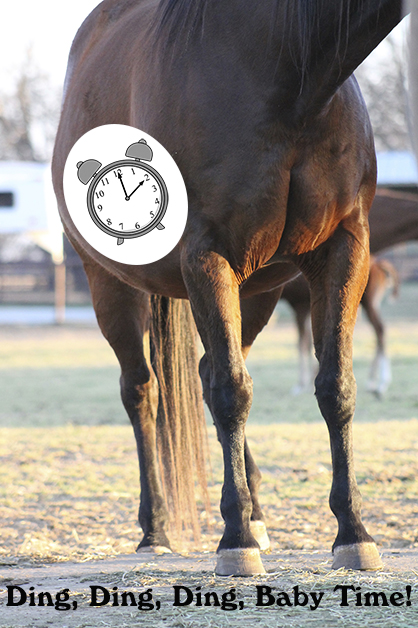 With breeding season right around the corner, it is time to start prepping our broodmares to carry a foal. Many breeders wish to synchronize the process among their broodmares as much as possible. This requires an understanding of the natural biology of the mare and involves many management considerations. The following is an explanation of general practices used to regulate the estrous cycle in broodmares.

Horses are known as “long-day breeders,” meaning that they will naturally go into heat for breeding when the days get longer in the spring and summer (at least, in the Northern hemisphere). They are also “seasonally polyestrous,” meaning that they will go through multiple estrous cycles during their breeding season. During the winter months or “short days,” the mare will not cycle. This period is known as anestrous. Changes in lighting as the days get longer induce hormonal changes which bring the mare into heat (estrus). As the mare periodically comes out of heat, this bout of reproductive inactivity during the breeding season is known as diestrus.

This can be inconvenient to breeders especially in certain pockets of the horse industry. Here, a foal’s birthday is considered January 1st, no matter his actual date of birth, so breeders prefer the foal to be born as close as possible to that date in order to be healthy and competitive within his age group. For example, if a foal is actually born in late March, he may be far behind others of his “age” in development, training, and physical size. This means that, allowing for an 11-month gestation period, a mare should be bred sometime in February in order to have the foal on the ground sometime in January. You’ll notice that this does not follow the natural schedule of the estrous cycle, which normally puts the mare’s peak breeding season in May or June.

More generally, especially in larger breeding operations, it is more convenient and efficient to have foals born near the same time for management purposes. This way, foals can be managed as a group in terms of nutrition, weaning, training schedule, and other factors specific to the facility. For these reasons, breeders look to artificial methods to bring their broodmares into heat for breeding around the same time.

Let’s review the mechanisms of a mare’s estrous cycle. The term “estrous” refers to the overall reproductive cycle including estrus and diestrus. Mares may begin cycling at 15 to 24 months of age, with estrus lasting 6 to 8 days early in the spring and reducing to 3 to 4 days during peak season. The ovaries produce estrogen, causing her to come into heat, and she enters the follicle-stimulating phase where a follicle forms on the ovary. This follicle is eventually able to shed an egg.

Ovulation (the shedding of the egg) occurs late in estrus, at most two days before the mare goes out of heat. However, in early season, the mare may show signs of heat but not ovulate at all. As the breeding season goes on, ovulation is more likely to occur simultaneously with the estrus period.

After ovulation, the mare enters the luteal phase, corresponding with diestrus. At this time, the follicle is replaced with the corpus luteum, a structure that produces the hormone progesterone. Progesterone is critical in maintaining a pregnancy and preventing a mare from cycling again, which could disrupt the newly established pregnancy. In the event that conception does not occur, hormones called prostaglandins will be released, removing the corpus luteum and preparing the mare to cycle again.

There are methods available to artificially regulate the mare’s cycle to coincide with the owner’s breeding plan. Using artificial lighting, we can encourage mares to ovulate. They will need 60 days of this artificial lighting before ovulation occurs. Place them in a confined area to receive 16 hours of total daylight, including natural and artificial. In order to breed in February, lighting should be started in late November or early December.

Hormonal injections can also be used to “short cycle” mares, or help return them to estrus early. This method could be used to help synchronize all mares in your barn to cycle at the same time for a timed breeding program, or to bring a mare back into heat after a missed breeding opportunity. Injections of prostaglandins are used to destroy an existing corpus luteum and reduce the production of progesterone. Returning to estrus will be dependent on estrogen production that follows. It is important to remember that prostaglandins will have no impact on a mare that is not already cycling: hormonal injection will not bring the mare out of seasonal anestrus or induce cycles in a currently non-cycling mare. The use of lighting is the only way to bring a mare into estrous.

Methods controlling the estrous cycle require intensive management with strict adherence to timing. Improperly done lighting or injections will result in poorly timed, unsuccessful breedings, becoming a waste of time and resources. The consultation of a veterinarian may prove to be instrumental in ensuring the success of such a program.