Blazing Hot – A Tribute to the Beloved AQHA Stallion 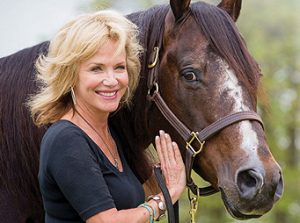 The story of Blazing Hot, one of the most legendary sires in AQHA history, is one that started long before the flashy, bay colt entered the world. In fact, it’s hard to deny the presence of God’s hand in this story when contemplating all the pieces that had to fit together for him to make such a vast impact, not only on those in his immediate circle, but on the entire horse industry. His story, from his first breath, to the legacy he has left behind following his death, is nothing short of miraculous.

From a young age, Joan Logan Schroeder of Gainesville, Texas, always dreamed of owning quality horses. While growing up in Michigan, it became apparent early on that her interest in horses was more than a passing fancy. Joan showed with her mom and dad at weekend horse shows in Michigan where they met Robert and Jean Wolf, their daughters, Jodi and Teri, and son, Tom, and they became good friends. Little did Joan know that this friendship would eventually lead to her acquiring her dream stallion, Blazing Hot. “The Wolf family had a mare named Miss San Sawyer, who was an amazing show mare. She had her superior in Western Pleasure and Halter, and I always dreamed of owning a mare like that,” Joan says. After high school, Joan ventured to Texas to pursue her horse dreams. Shortly after her move, fate brought Joan together with a mare named Toshi. Toshi, who was a daughter of the Wolf family’s great mare, Miss San Sawyer, was sent to Texas to be bred to Zippo Pine Bar, and she had a filly on her side. Unfortunately, the filly became ill with pneumonia and needed around-the-clock care. Joan stepped up to the plate and cared for her with the help of Dr. John McCarroll. “Dr. McCarroll taught me how to administer oxygen and medicine to improve her health. Miraculously, we were able to save her,” Joan says. This miracle filly was named Tahnee Zippo. In return for the loving care that Joan gave her when she was sick, the Wolf family gave Joan part ownership of the filly. This opportunity was one of the many pieces of the puzzle that fell into place that paved the way for Blazing Hot to come into the world.

Unfortunately, Tahnee Zippo’s career as a show horse was cut short when she was injured as a 2-year-old. However, she proved her worth as a broodmare early on when her first foal by Hotrodders Jet Set–Hot N Spicy Me – trained by Joan and Robbie Schroeder and piloted by Keith Whistle, went on to win the Congress and World Show in 2-Year-Old Western Pleasure unanimously. Joan recalls, “We were the first ones to breed a Zippo Pine Bar daughter to Hotrodder, and we were definitely ahead of our time. But, we were certain this was the cross.” Always a dreamer, Joan had high hopes that Tahnee Zippo would have a stud colt resulting from the same cross. She already had the perfect name picked out for him when he arrived, Blazing Hot. Although few things in life happen exactly according to plan, on April 17, 1992 Blazing Hot made his entrance into the world and exceeded every dream Joan could have ever imagined. “I knew there was something extra special about Blazing Hot from the moment he took his first breath. I knew that his birth was the start of something big,” she says. More affectionately known as “Blaze,” he was born shortly after the birth of Robbie and Joan’s son, Ryan. Joan has always called Blaze her second son, as he immediately became a member of the family.