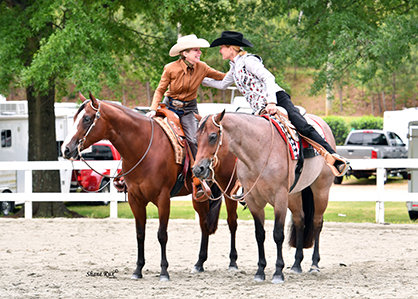 Special thanks to Shane Rux Photography for the great shot of Susan and Lisa!

For best friends, Susan Simms and Lisa Johnson, the AQHA L1 Championships East was the culmination of a lifelong journey and friendship that began nearly 20 years ago. From first meeting in a trainer’s barn in the early 90s, to going through the trials of life, including a broken hip and stage 4 breast cancer, and then to reconnect with a new trainer 20 years later, both of these ladies have shown they have the drive, determination, and dedication to the sport they love and to each other.

Their efforts were rewarded just a few weeks ago when they jogged down the center line in Raleigh, NC., fittingly one right behind the other, and were named the Champion and Reserve Champions in Select Western Pleasure. Susan Simms claimed the top spot with her 8-year-old gelding, Chevy Metal, and Lisa was named Reserve with her 6-year-old gelding, ML Super Lazy. Both ladies compete under the guidance of Steve and Jennifer Reams.

“If someone were to have said, ‘In your wildest dreams, what’s the script you would write?’ this would be it,” Lisa says. “Steve and Jennifer work so hard, and I’m so thankful for the hard work they put in. They want us to be happy, and they put in long hours. I feel like I’m more than a client. We have a relationship, and we all care deeply about one another. There is a special bond we have. It’s our witness and all glory goes to God.” 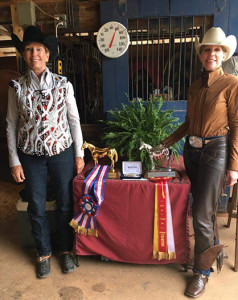 “It was a blessing that we were able to find each other after all these years,” Susan says. “Lisa battled some real health issues, and I had broken my hip, so we’ve been a support system for each other. Then, all these years later, we reconnected on these two Western horses. We’re both novice and select riders, so we spend a lot of time supporting each other with all the nerves and the normal things you go through when you’re both a novice and a select!”

When Lisa was searching for a new horse a few years back, she sought the guidance of Steve Reams, a trainer she’d worked with in the early 90s. “Honestly, I didn’t have the finances to go buy a horse that was already finished and showing. I called Steve and said, ‘Do you know of a diamond in the rough?’ In January 2014, we found the little gelding I’m showing now. 10 months later I was diagnosed with stage 4 breast cancer. I remember telling him about the diagnosis, and I told him to keep riding my horse because I would be back. Steve, Jennifer, Susan, and all my friends at the barn were awesome. Just knowing he was out there was such an incentive for me to get back in the saddle. I give all the glory to God. It has been so awesome. My little horse is such a blessing.”

In addition to her beloved gelding, “Shadrack,” giving her the push she needed to survive and thrive following a grim breast cancer diagnosis, it was Lisa’s friendship with Susan that kept her strong. “My friendship with Susan is so important to me. We can’t wait to get together and ride. We text back and forth about the next time we’re going out to the barn to get to spend time together. She’s had some very difficult issues in her life as well, and the horses just make everything… so sweet.”

Susan has faced her own trials and tribulations. After breaking her hip, she decided making the switch from English to Western was not only a necessity but would provide a much-need mental and physical challenge. “Part of the reason I switched was because I had a family member who had some memory issues, so I decided to challenge myself by trying something different. Then, breaking my hip was the icing on the cake. When doctors talk about fending off Alzheimer’s as you get older, they want people to learn new skills to keep their minds sharp. Learn how to play the piano. Learn how to play the guitar. But I don’t want to play the piano or the guitar. I want to ride!” 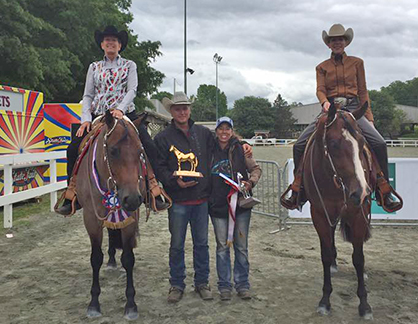 Both Susan and Lisa had competed at the L1 Championships before. Last year, they both placed in the Top 10 in Select Western Pleasure. But their past success didn’t mean they weren’t feeling the nerves when it came time to enter the show pen this year. “The process before the preliminaries was pretty entertaining,” Susan says. “Lisa was practicing her jog and her lope by herself in the barn aisle, which I got a big kick out of. It helped with the nerves and the jitters.”

“She was right behind me when I jogged in, and then I lost track of her in the class. The next thing you know we’re standing in the center after the class had concluded, and it was just the two of us. She was very emotional and looked over at me. I told her not to, but she started to cry. I moved over closer to her, and we hugged each other. It was a really special moment. We’re still talking about it!”

As the oldest Select rider in the Reams’ barn, at 63 years young, Susan has a few parting words of wisdom for those novice select riders out there who feel their time to be competitive in the show pen has passed. “It’s not true! There are a lot of Select riders in our group, and I’m the oldest one of them. We all keep saying that we will keep doing this until we can’t do it any longer. I’m proof that old dogs can learn new tricks!”

Congratulations to Susan and Lisa on this exciting and well-deserved accomplishment!