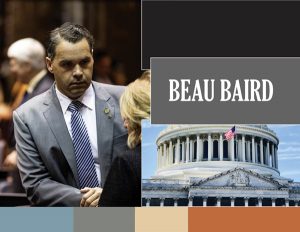 “I know it sounds cliché, but growing up, my father instilled in me to look out for friends, family, and neighbors, so I don’t think we ever drove past a stopped car or someone walking on the road without asking if they needed assistance,” Beau says.

The setting of the small town of Greencastle, Indiana, provided the backdrop for an experience Beau remembers when he and his father, Jim Baird, were driving across town to a meeting, running late, and they approached a cattle trailer with the door propped open and loose cattle. The Baird men quickly stopped to help round up the cattle despite their business suit attire.

Beau’s mother, Danise Baird, inspired the same principles about caring for the community. One major demonstration of that love has lasted in the form of Indiana Home Care Plus, a company that has been in the family for 35 years. Beau explains that the company, in which he now serves as Chief Financial Officer, began when his mom was a nurse working at a hospital. “My mother was from a more rural county than ours, Parke County. As she was watching patients being discharged from the hospital, she knew they didn’t have access to clinics. She was worried about the quality of care they’d get when they got home, if any, so she and a few other nurses made sure they checked on them.” That dedication eventually blossomed into Indiana Home Care Plus, which services approximately 22 Indiana counties.

It was this same mindset that eventually led Beau to his current position as State Representative in the Indiana House of Representatives, representing House District 44. Even though he originally had no intention to venture into politics, his steadfast sense of community won him over.

“My dad really raised me to care about my community, so when he decided to run for Congress (he’s now Congressman Jim Baird, Republican member of the U.S. House of Representatives from Indiana’s 4th congressional district), I understood the value of public servants,” Beau says. He had always enjoyed working behind the scenes as County Chairman for the Indiana Republican Party, but when his father ran for Congress and left the state representative seat open, Beau tried to find a strong candidate to replace him, but he didn’t succeed.

“Right after the County Chairs asked me to run, I then asked for my father’s opinion, and I remember it was the first time in my life that he did not give me advice or suggest one way or the other,” Beau says. “He wanted me to do what was right in my heart.”