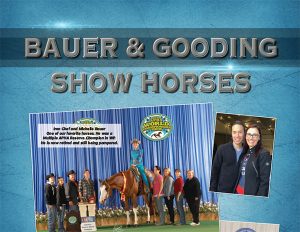 In 1985, a then-18-year-old Sonnesa Shield was busy hauling cross-country in the chase for APHA’s Youth High Point title. Her father, R.B. Shield, who bred and raised Paint Horses and was the leading breeder of of APHA Halter horses for many years, had become friends with trainers, Barry and Noreen Gooding. R.B. decided to send Sonnesa to and her horse to the Goodings so she could compete at a string of Midwestern shows in her hunt for points. Little did they know that not only would Sonnesa earn a heap of APHA points during that time, she would also win the heart of the Goodings’ son, Garth.

At about that same time, Michelle Bauer, then just seven years old, was getting her start in horses thanks to a community education program that offered horseback riding. It was a program that would light a lifelong fire in Bauer, who began taking weekly lessons shortly after, joining 4-H, and, at age nine, getting a horse of her own named Cindy. Cindy wasn’t nearly broke enough for a beginner, so Michelle next got a horse called Pistol.

Unfortunately, Pistol lived up to his name in terms of attitude. By then, Michelle’s dad, Fred, had started to worry that Michelle was going to get hurt on her half-broke mounts. So, he found her a gelding named Cody, a pony horse off a racetrack. Cody had never been shown, but he was quiet and broke, and Michelle began taking him to local open shows.

By the time she was 12, Michelle was ready to step up and try some APHA shows with the long-term goal of going to the APHA Youth World Show and Paint Horse Congress. For that next level, she would need a more competitive horse. A customer of the Goodings had just the horse to suit her needs, a gelding named Dally Cat. He had already been very successful in the show pen and “was by far the nicest horse I had ever ridden,” Michelle recalls. The Bauer family purchased Dally Cat and decided to leave him in training with the Goodings.

It was a decision that would lead to a lifelong relationship between the two families and the eventual establishment of Bauer and Gooding Show Horses, a partnership that has lasted more than 20 years and produced more than 150 APHA World and Reserve World Champions, numerous Honor Roll Champions, multiple Quarter Horses Congress Champions and Reserve Champions, and many NSBA World and Reserve World Champions. Dally Cat did, in fact, take Michelle to the APHA Youth World Show where they had multiple Top Ten finishes. They were also Reserve High Point in 13 and Under at the Paint Congress.