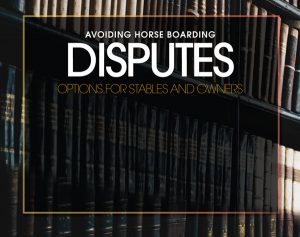 By Julie I. Fershtman, Attorney at Law

Disputes sometimes occur between boarding stables and horse owners.  Occasionally, they become lawsuits.  From the standpoint of a lawyer who has served boarding and training stables as well as horse owners in these disputes for decades, here are two common disputes and ways that each party can protect themselves.

I have handled numerous lawsuits involving these claims.  In one case, a horse was kicked in the leg by a pasture mate and had to be euthanized.  Another involved a breeding farm that stabled broodmares and arranged for on-site breeding to its stallion; one day, the stable’s attending veterinarian palpated the mare to check her condition before breeding, but the veterinarian accidentally perforated the mare, and she was later euthanized.  The owner sued the veterinarian but also blamed the stable for not monitoring the mare hours before she died.

To protect themselves, boarding stable managers and trainers have a few options:

1.  Use well-worded liability releases (where allowed by law) pertaining to the horse.  Stables that include releases in their boarding contracts (where allowed by law) would be wise to pay special attention to the language.  If possible, have a lawyer draft or review it.  Never assume that the same release language that is designed to protect the stable against claims of injured people will equally protect the stable against claims involving injured horses.  Details matter, especially with liability waiver/release agreements and clauses.  Years ago, I defended a stable that was sued by a boarder whose horse was attacked by another horse in the pasture.  The stable had no way of knowing of a problem as the injuries were beneath the horse’s winter blanket and not visible. Because of the release in the stable’s boarding contract, I quickly convinced the judge to dismiss the lawsuit.

3.  Make sure your boarding contracts address your services.  Stables have every incentive to list or at least describe their services. Years ago, I defended a stable in a lawsuit brought by a horse owner whose horse was attacked by another horse in the pasture.  The suit claimed the stable wrongly pastured her horse in a group pasture instead of an individual paddock.  The stable disagreed, noting that it offered no individual paddocks, and the owner approved a group pasture for weeks. Unfortunately, nothing was in writing.  Until the case resolved, each party faced large legal fees as they tried to prove what the agreement was.

Horse owners have options, as well.  Here are two of them: