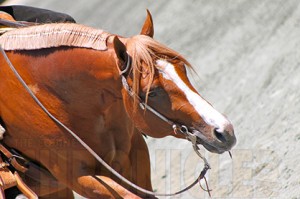 Stephen Stephens of Dry River Ranch is thrilled to relay the news, on behalf of new owner Sandra Morgan, that AQHA stallion Mechanic will be standing to the public beginning February 1, 2014. This new addition to the Dry River Ranch lineup comes on the heels of the unfortunate passing of Morgan’s AQHA stallion Good I Will Be in November of last year.

Although the sudden loss of their beloved “Willy,” due to complications from kidney stone surgery, saddened many in the horse industry, Stephens believes that Mechanic will certainly be able to fill those shoes by proving his merit as a successful all-around sire.

“We’re so excited,” Stephens says. “Even before Good I Will Be died, I remember being impressed with this animal. He’s big and beautiful. I remember seeing him last year, and I told Sandra that he would be Willy’s competition. There was no doubt.”

“When all of this went down and Willy passed away, it was right around the time of the World Show. Shane Pope called and asked if we would be interested in purchasing Mechanic. I said that I think we might. I have always really enjoyed the animal. Sandra and I got on the same page and got on a plane down to Myrtle Beach. We tried him out, and we both fell in love. He has a really sweet personality, and he is a stunning horse. I can’t use another word to describe him. He is just beautiful in every angle.”

When looking for a stallion to compliment their breeding program, Stephens was searching for a horse that possessed conformational correctness and the ability to cross on both english and western mares.

“We wanted one that would breed well on english and western horses and that also had the conformation and halter ability,” he says. “Mechanic was bar none the closest thing we could even begin to find.”

Mechanic arrived in Weatherford, Texas on Sunday morning and is quickly adjusting to his new surroundings before his breeding season begins on February 1st. Stephens has indicated that frozen semen will be preserved and breeding will be open to the public. In addition, Stephens hinted that the stallion might be making his debut in english events in the not-so-distant future.

“It was so hard [for us] when Willy died, but we had so much fun with him,” Stephens says. “It’s so exciting because this horse is so much like Willy. He’s had very limited showing, but he’s sure ended up winning a bunch. I’m just impressed at how many people have followed this horse during his short career. We’re definitely going to show him and try to put some of the english [events] on him and maybe the western riding.”

“We are sitting right here on the breeding cusp, so we are probably going to focus more on breeding than showing. He will be standing here to the public beginning February 1st. I think he is going to be an all-around great sire of western pleasure and hunter under saddle horses, just like Good I Will Be was.”