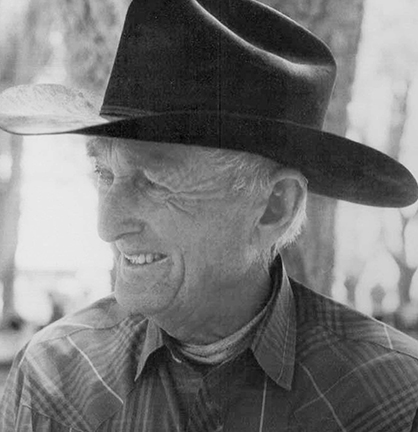 Punch was born November 5, 1928, in Roswell, New Mexico. His father, A.D. Jones, bred and established the Debouillet breed of sheep, and he himself was a lifetime rancher.

Punch married Suzanne Norton in 1953, and together they established a breeding dynasty from the Thoroughbred mare Maroon.

The filly turned out to be a rewarding wedding present for the couple. She went on to set three track records at Ruidoso and two track records at Albuquerque. This prized filly started the Jones’ in the horse industry, and they bred more than seven generations of broodmares all founded on her. The A. D. Jones Ranch ran a “closed herd,” which meant they did not allow any females to leave the ranch. One of the biggest success stories is Rule The Deck, a fourth generation female out of the original filly that went on to win $522,165 on the track.  Punch and Suzanne also owned Kuhi Kuhi, a granddaughter of Rule The Deck.  Kuhi Kuhi became one of the top racing mares of the time.

Here they had match racing almost every weekend.  He acquired a definite set of ideas on conformation.  Not liking the extreme bulldog type, which was the fashion then, he wanted a horse with a little more leg, well-set withers that ran well back into the horse’s back, flat bone and a broad flat knee.

He would focus on the breeding and administrative route. He served as a director in NMQHA and AQHA, and was a member of both the racing and stud book and registration committees.  He was also president of the New Mexico Horse Breeders Association. Punch was honored in 2000 with the first Annual Southwest Cowboy Celebration, which highlighted the A. D. Jones Ranch’s contribution to the culture of the Southwest.  He was also inducted in 2004 into the Lea County Cowboy Hall of Fame.

Suzanne Jones was inducted into the American Quarter Horse Hall of Fame in 1999. He followed her into the hall in 2008.

The services for Punch are under the direction of Anderson Bethany Funeral Home and Crematory in Roswell, New Mexico. A further announcement will follow when arrangements are finalized.