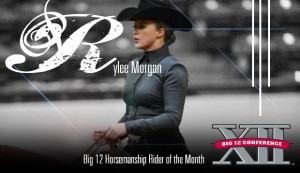 FORT WORTH, Texas – TCU Freshman Rylee Morgan was honored Wednesday as the Big 12 Horsemanship Rider of the Month.

Morgan went undefeated in conference competition during the month of February, defeating Mary Brown of Baylor and Lindsey McMullen of Oklahoma State. She opened the month going 3-0 before dropping a hard fought 70.5-66 decision to SMU’s Morgan Redwine last weekend. The Utah native currently sits at 4-2 overall and boasts a 3-1 mark in conference action.

The Horned Frogs, who currently sit atop the Big 12 standings with a 3-2 league record, have a chance to capture the No. 1 seed in the Big 12 Championship with a victory at K-State Saturday.