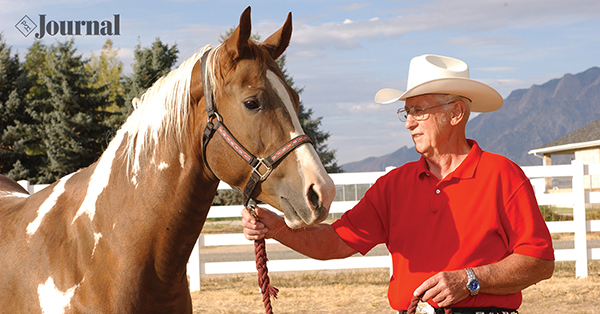 Carl Parker, a past president of APHA from Marriott-Slaterville, Utah, died February 25. APHA is saddened to hear of his passing and sends condolences to his family and friends.

Carl was raised in Sacramento, Calif. He worked for the Southern Pacific Railroad starting at the age of 17 and retired as the Mechanical Division General Manager. He served in the US Navy from 1951 to 1955. In 1954, Carl married Jeanne Anderson of Sacramento, Calif. but later divorced. In 1980, he married Maurine Kidman Coleman from Slaterville, Utah.

As a young man, Carl developed a love for water skiing, German Shepherd dogs, and horses. His involvement with Paint Horses began in the mid-1980s at the urging of Maurine. He served on the Utah Paint Horse Club board of directors for 11 years and as president for eight years. Carl served on the Utah Horse Council for six years.

Carl was well-respected in and out of the APHA arena and led by example. He was APHA’s 41st president from 2006-2007. Notable Paints Carl raised include APHA Champion Imatinkeyssugarbar, APHA Champion and Superior All-Around Mr Tramp and APHA Champion Ravishing Rose.

Representing APHA, Carl and Maurine traveled to many countries including Europe, Russia and Brazil. Carl served on the planning commission for Marriott-Slaterville city, receiving an outstanding community service award. He loved hunting and fishing and spending time with his loving wife and family.

Carl will be missed by his APHA family. Our thoughts and prayers go out to his family.