APHA Lifetime Leading Youth Hunt Seat Horse, Spot Me A Seven, Has a New Side Gig 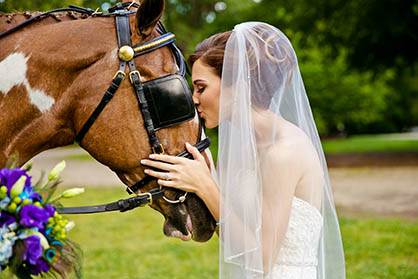 Logan gives Harley a kiss before she walks down the aisle. Photo courtesy of Michelle Gunton Photography.

APHA’s Lifetime Leading Point Earning Horse in Youth Hunter Under Saddle, Spot Me A Seven, now has a new side gig in his semi-retirement… pulling wedding carriages! Granted, it was probably just a one-time appearance, but still the 21-year-old Paint Horse gelding fondly known as “Harley” was more than happy to participate in the wedding of one of his former youth partners.

Just a few weeks ago, on May 14th, 2016, former AjPHA youth competitor, Logan Taylor, officially became Logan Taylor Bostic when she wed Hunter Bostic in a woodland ceremony at Chapel in the Woods at Ingleside in Louisburg, North Carolina. Logan fully expected that her father, Chris Taylor, would walk her down the aisle, but what she didn’t know is that she would be accompanied by another leading man in her life. 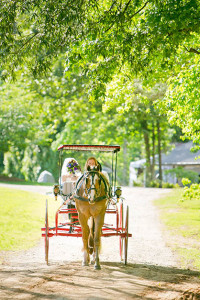 “I had no idea that Harley would be a part of my wedding until rehearsal night,” Logan says. “My trainers at Dare to Dream Performance Horses, Allan and Julie Schmidt, showed up with him and a carriage that was her great grandfathers that they had restored. It was such a joy to see him there. His birthday was the same day as my wedding! My mom, Allan, and Julie put the whole plan in motion and completed my day!”

Having Harley supply the wedding transportation might have been a surprise to Logan, but it was far from a spur of the minute idea. “According to my mom, Julie and Allan were on board as soon as she had the plan,” Logan says. “They went above and beyond to prepare Harley, from ground driving to cart driving and eventually to pulling the carriage.” 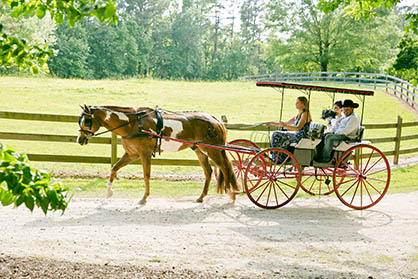 “That horse means the world to me and has more heart and drive than any horse I’ve ever known. He took right back to driving. He snorted at the carriage for a second and then stepped right up to the task. Allan’s dad, who I refer to as Big Al, made sure he came and everything went on time and that Harley was the perfect chauffeur.”

“Harley has been a part of my life since I was twelve years old,” Logan says. “He was my first Paint Horse and the first horse I ever showed in breed shows. A lot of my horse friends were at the wedding and the experience was overwhelming. The children enjoyed him so much; it was such a joy.”

“Allan and Julie were second parents to me growing up. They and Harley took me all the way to my dad. Allan had a hard time letting me go for my dad to walk me down the aisle. It was one of the most memorable moments of my life.” 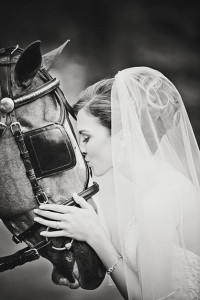 How did Logan’s husband feel about having a horse participate in their wedding ceremony?

“My new husband Hunter loves Harley!” Logan says. “He has experience with horses and helps me tremendously with my barrel horses. Harley was the first pleasure horse he has ever ridden. He loved learning how to work him off his legs and learned an appreciation for pleasure horses through him. He knows what a special place Harley has in my heart and knows he has to share me with my horses.” 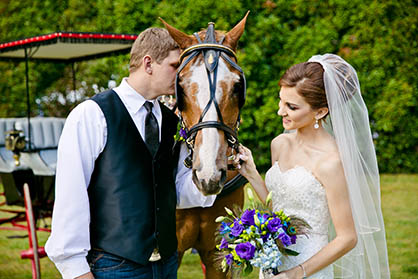 Special thanks to Michelle Gunton Photography for the beautiful images of Logan and Hunter’s wedding, one of which was recently featured in The Huffington Post.

Author’s Note: Harley not only has brought great joy to the lives of Jennifer, Barbara, Ryan, Austin, Kelly, Cat, and Kayla, he was also my youth horse during my time spent in APHA competition, helping me win my first World Championship title and #1 Youth in the Nation in 2004. He is beloved by many in the industry as a patient teacher, gentle soul, and all-around good guy.