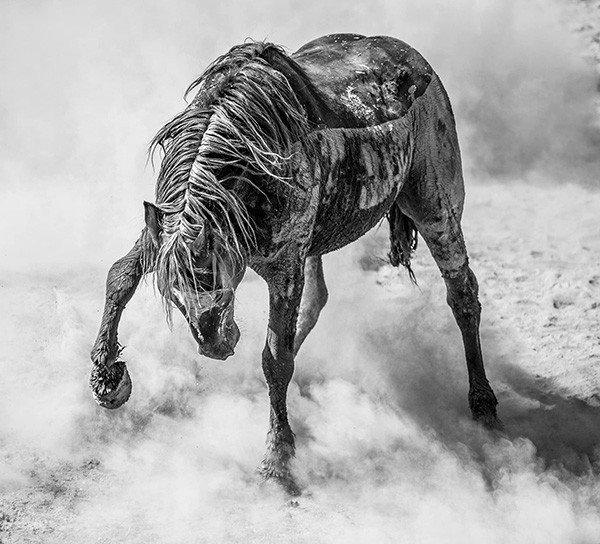 Denver-based photographer and American Wild Horse Campaign (AWHC) board member Scott Wilson photographed the black and white image of the stallion, which won two top awards in the 2022 SONY World Photography Awards contest. Out of 170,000 entries from across the globe, the image, titled Anger Management, won first place in the Natural World and Wildlife category and earned Wilson the Open Photographer of the Year prize, announced by the World Photography Organization.

“Anger Management puts the wild horse question in the minds of people that are suddenly seeing this image, seeing a stallion pounding the ground and really starting to question what’s going on with American mustangs,” said Wilson, who originally hails from Glasgow, Scotland but is a resident of Denver, Colo. “But the tension and the drama for me just felt completely symbolic of the challenges these horses face in the American West today, where they basically are under permanent threat of roundup and their land has invariably been cleared for the cattle industry.”

“We are so grateful that Scott is devoting his time and considerable talents to saving the iconic wild mustangs of the American West,” said Ellie Phipps Price, president of AWHC and a member of Colorado’s legacy Phipps family. “We congratulate him on this well-deserved recognition and hugely impressive accomplishment.”

The Sony World Photography Award is considered one of the world’s most prestigious photography awards. The recognition of Anger Management elevates the plight of America’s wild horses to an international audience and calls attention to their inhumane treatment by the U.S. federal government.

Click here to learn more about the advocacy work of Wilson.

About the American Wild Horse Campaign

The American Wild Horse Campaign (AWHC) is the nation’s leading wild horse protection organization, with more than 700,000 supporters and followers nationwide. AWHC is dedicated to preserving the American wild horse and burros in viable, free-roaming herds for generations to come, as part of our national heritage. In addition to advocating for the protection and preservation of America’s wild herds, AWHC implements the largest wild horse fertility control program in the world.