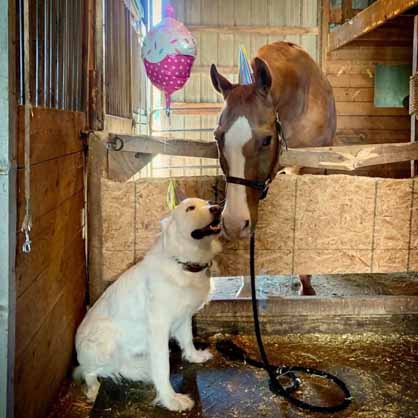 On December 30, 2019, Bonnie Sue Kalmar looked out her window to see a big, white, fluffy dog wandering at the end of her driveway where she lives in the “thumb” of Michigan, better known as the Blue Water Area.

Seeing a stray dog seemed unremarkable, so Kalmar simply walked the dog to her barn where she had a spare stall to keep her safe for the time being, even though something her late mother had said offhand once about coming back as a big, white dog to check on everyone niggled in the back of her brain.

Temporarily calling the dog “Elsa,” Kalmar put her in a stall next to her AQHA gelding, Investers Chip, aka Clarence.

“She barked at Clarence for a short time; I don’t think she had ever seen a horse before,” Kalmar says. 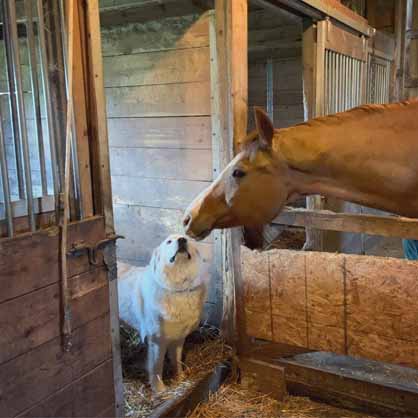 “But I noticed right away that Elsa would climb up on hay bales so she could see Clarence beyond the bars of her stall. When I would take her out, he would try to touch her and she would touch his face and give kisses. She laid by his feet when I had him tied up, and they just generally seemed at ease with each other.”

While Kalmar began to search for Elsa’s owners, the dog and her gelding surprised her by bonding with each other.  It had been bothering Kalmar that Clarence had retired alone, but she admits to having reservations about finding a companion for him. “He’s one of those geldings that will break a halter every few days playing halter tag and wind up with welts all over from playing so hard and annoying the other horses,” she says. 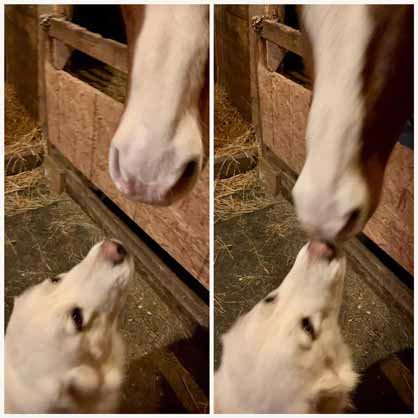 Before she knew it, the pair had become best buddies. Kalmar explains, “If I take Elsa for a walk, Clarence will call to her as we leave and vice versa if he has to leave on the trailer. They are just very good friends.”

Eventually, after an exhaustive search, Kalmar found Elsa’s previous owners through Facebook and through the “For The Love of Louie” group via (Michigan Lost Pet Lookers). She found out the dog, previously named Pearl, had passed through more than one set of hands, eventually winding up at her place. Through Elsa’s microchip, her second owner was finally found, but by the time they contacted Kalmar, Elsa’s fate seemed to be sealed.  The second owner, hearing how Elsa had bonded with Clarence and how Kalmar had cared for her, surrendered her to Kalmar.

Though Kalmar heard more than one version of how Elsa came to be running free, she decided to focus on the fact that Elsa seemed to belong with her. “Maybe we’re all just doing the best we can with what we have,” she says. “The truth is that Elsa was meant to be with me, and I chose to focus on that fact over all the 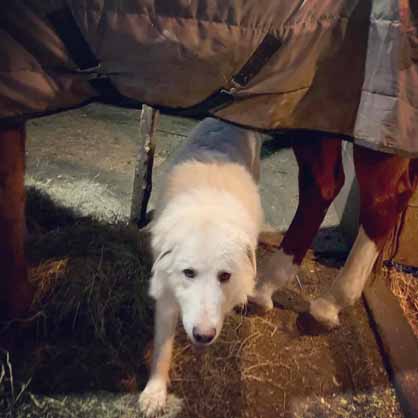 Most of all, she’s appreciate of what Elsa’s arrival has done for both animals.  “My gelding has a variety of seasonal allergies and it was hard for me to admit he needed to retire. Finding Elsa to keep him company was a game changer and once she was officially mine, we constructed a kennel that allows safe access to each other 24/7 and an outdoor area where they can see each other as well. He has been calmer, experienced less stress, and has had less allergy flares than when he was alone,” she says.

Elsa’s arrival in their lives had an unexpected impact on Kalmar, too.  “This experience has been very healing for me. It helped me find a more peaceful way of being. It helped me come to terms with the death of my mother in 1995 when I was 15 years old.”

Kalmar reveals that a year or so before her passing, her mother had watched the Hallmark movie “To Dance with the White Dog.”

“It is about a widow who believes his wife returns to him as a white dog. I don’t remember every word my mother said anymore, but I remember so clearly her saying to my father, ‘Oh, Bill, I would come back as a white dog to make sure you are all okay’,” Kalmar says. “When I looked out the window on December 30, 2019, the first thing I heard in my head was my mother’s voice saying those words,” she explains.

In the meantime, Kalmar has found through research that livestock guardian dogs can bond with horses this way, and that Elsa is a Maremma Sheepdog, the Italian cousin of the Great Pyrenees and one of the oldest breeds in the world. She occasionally calls Elsa by the name Pearl, and found she still answers to both names.

“”Elsa Pearl’s presence in my life has given me so much,” Kalmar concludes. “She gave me back my faith. She gave me the ability to feel a greater forgiveness for what other people go through in their lives. She gave me the strength to realize we do not ever walk alone. In our own way, with our own truths, we are all walking with our big white dog.” 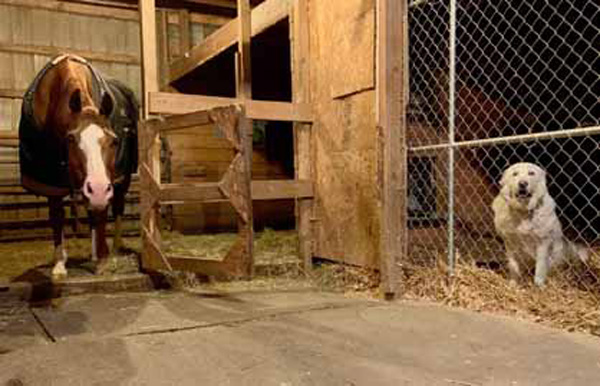