An Experiment- Do You Know the Temperature Inside Your Horse Trailer? 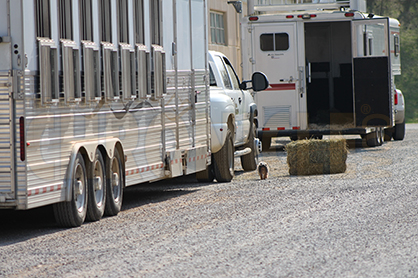 Temperatures inside horse trailers are a concern to most endurance riders I know. We tend to haul very long distances, both in the heat and in the cold. I had to do some winter hauling one day, and before I left I installed a temperature monitor inside my horse trailer. What I discovered was surprising, fascinating, and changed my mind about what I thought was going on back there… so I decided to share what I learned in case it’s of value to anyone else.

I hauled two horses about 6 hours through the mountains in western Montana to a veterinary facility in another town. I was concerned about the temperature for the horses before I left. The forecasted temperatures along some of the route were in the low single digits. My horses have very good winter coats, but I was trying to decide whether to blanket or not. I recently switched to an enclosed gooseneck trailer and realized that I had no idea what hauling conditions in the winter were like back there.

I bought an inexpensive temperature monitor with a base station- the kind folks hang out on the porch so they can see what outdoor conditions are like without going outside. Before I put it into use in the trailer, I verified its accuracy by comparing its readings to some equipment I know is very accurate.

I hung the sensor in a mesh bag (good air flow) about halfway up the side of the wall in the trailer that encloses the rear tack room. I didn’t put it on the roof (heat rises) or near the floor (cold air sinks). My trailer is a thee-horse slant load, and I put it in the stall that did not have a horse in it. It was not hanging on an exterior wall. My trailer is not insulated- no living quarters, just a standard small dressing area in the front.

The trailer did have about three inches of hard encrusted snow insulating the roof. This snow stayed the entire journey.
The side windows could not be opened. They were encrusted with ice; however, we opened all three roof vents to their maximum extent and turned them so airflow would be maximized.

When we left our house in the Bitterroot, the temperature inside and outside the trailer both read 20 degrees. By the way, I was using my truck temperature monitor to determine the outside temperature. I had previously verified its accuracy and that it read the same as my newly purchased gear.

We stopped for a half hour pitstop and did not unload the horses. However, I opened the back door and let cold wind flow into the trailer. The temperature in the trailer quickly dropped to the high 20s, but they were back up to the low 40s in about half an hour.

We left both horses at the vet in Three Forks and returned with an empty trailer. All the way home, the temperature inside the trailer was identical to the temperature outside.

So, here are my take-aways from all this.

First of all, it’s very easy to monitor the temperature in your trailer, and I would highly encourage everyone to do it! I think I spent about 20 bucks on my monitoring stuff, and it was easy to use and very accurate.

Secondly, I cannot believe how fast two horses could heat up a three-horse trailer in very cold weather and keep it warm. I never dreamed that horses radiate that much heat. And to think I had been considering blanketing them.

Of course, the need to blanket and other things might be different if your horses are body clipped or your trailer is different. Of course this is an enclosed gooseneck and not a stockside trailer. But rather than just guess what might be going on back there and whether it’s appropriate for your clipped horse (or sick horse) just go get a temperature monitor and find out!

Believe me, my eyes are going to be GLUED to this thing come summer when I’m hauling in hot temperatures…

If you have a blog post to share on a topic in the horse industry, email B.Bevis@EquineChronicle.com for consideration.