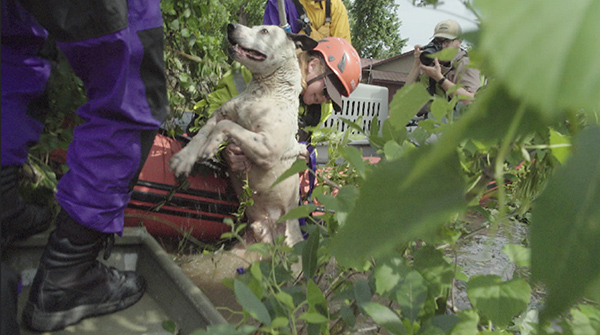 WASHINGTON, D.C., May 28, 2019 – The American Humane Rescue team, first to serve in saving and sheltering animals for more than 100 years, has deployed with a veterinarian, trained swift and floodwater responders, rescue boats, critical medical and sheltering supplies, and one of its giant 50-foot animal rescue vehicles to save animals caught in the deadly Oklahoma floods.

The American Humane Rescue team responded at the official request of Oklahoma Department of Agriculture, Food and Forestry, and is now engaged in search-and-rescue and flood/slack water operations, assisting both companion animals and farm animals in need. The team has been navigating the floodwaters in the Muskogee area, saving multiple cats and dogs alongside the fire department and Code 3 Associates, Oklahoma Large Animal First Responders, Muskogee Animal Control and Sheltering, and the Humane Emergency Animal Response Team.

American Humane, the country’s first national humane organization, has a long history of helping animals in Oklahoma. The group deployed following devastating flooding in Tulsa in 1984, a tornado outbreak in 1999, and the devastating 2013 EF-5 tornado in Moore, after which the team spent more than a month rescuing, sheltering, and reuniting hundreds of animals. On the third anniversary of the Moore tornado, American Humane, with funding from the Kirkpatrick Foundation and the Donner Foundation, placed a giant, new 50-foot animal emergency vehicle in Oklahoma City. That vehicle, which carries a contingent of highly trained rescue experts, boats, and lifesaving medical supplies donated by Zoetis Petcare.

As emergency responders continue to help people and animals, pet owners need to know that even though the storm has passed, the dangers have not. Here, for all those affected by the flooding, are some important tips from the experts on the American Humane Rescue team:

“Storms like these can be deadly for pets who are separated from their families,” said Robin Ganzert, PhD, president and CEO of American Humane. “It is important that every person and pet parent heed these lifesaving tips in the aftermath of this destructive storm. We are working to help all of our friends in Oklahoma to stay safe in this disaster.”

American Humane is the country’s first national humane organization, founded in 1877, and the first to serve animals in disasters and cruelty cases. Visit American Humane at www.americanhumane.org today.

About the American Humane Rescue program

The American Humane Rescue program was created in 1916 at the request of the U.S. Secretary of War to save war horses wounded on the battlefields of World War I Europe.  Since then, Red Star has been rescuing animals of every kind and have been involved in virtually every major disaster relief effort from Pearl Harbor to 9/11, the Joplin, Missouri and Moore, Oklahoma tornadoes, the Japanese and Haitian earthquakes, Hurricanes Katrina, Sandy, Harvey, Maria and Michael, and the California wildfires. The American Humane Rescue team saved, sheltered and fed more than 600,000 animals in the past year alone.