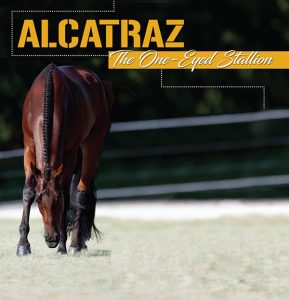 If you’ve been around horses as long as Nancy Sue Ryan, you can spot the special ones as soon as they’re born. When a foal hits the ground and calmly takes in everything around them, you know they’re different than the rest.

Such was the case with Alcatraz, aka “Dewey,” a handsome, bay colt by Allocate Your Assets and out of Maid for Luke. Maid for Luke is owned by Barry Falkenham, DVM, a longtime friend of the Ryan family whose reputation for exceptionally bred horses precedes him. This includes the multiple champion mare, Beautiful Maiden, who is a full sibling to Alcatraz. Given his breeding, Dewey was already a promising foal sight unseen, and his arrival in 2015 exceeded everyone’s already high expectations.

“When he was a baby, he was very special. We always knew he was going to be exceptional,” says Nancy Sue Ryan, trainer at Show Stop Farm in Nocona, Texas. “He looked to be a stallion prospect as a baby. He was big, beautiful, and balanced. For me, he was the best Allocate Your Assets colt that I’d ever raised, and I wanted to keep him a stud.”

When he was three months old, Dewey was turned out to pasture with the other colts at Show Stop Farm. Somehow, he managed to get a stalk of alfalfa caught in the center of his right eyeball. Diagnosed with a melting corneal ulcer, Dewey spent approximately three months in the hospital. “Finally, they sent him home, and the eyeball kept getting bigger. We were told that the orb would keep expanding,” Ryan says. Despite diligent efforts to save his eye, and being on stall rest for his yearling year, the oversized eye was blind forevermore, and the decision was made to remove it.

The Show Stop team moved on, finding another solution for the promising, young stallion. “We had a prosthesis put inside his eye in 2017,” Ryan says.

That year, Dewey was slated to show for the first time in The Equine Chronicle Masters Hunter Under Saddle at the Quarter Horse Congress. On the Thursday before their class, Ryan was sideswiped by another horse in the practice arena. That resulted in a broken leg and surgery for Ryan. Therefore, Dewey wasn’t shown during his two-year-old year. Soon after, Ryan’s daughter, Courtney Brockmueller, took up the reins, and competed with the stallion into his three-year-old year.