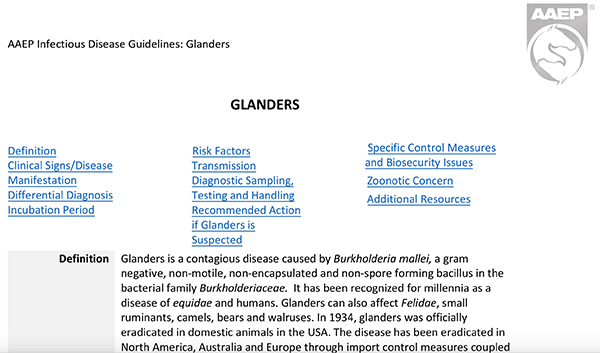 The American Association of Equine Practitioners (AAEP) has published on its website comprehensive guidelines for the identification, control and prevention of Glanders, a contagious disease largely eradicated from the developed world but which has resurfaced recently with reported cases from countries in Asia, Africa, the Middle East and South America.

Although long eradicated in North America, Australia and Europe, recent outbreaks in countries in which Glanders was previously eradicated indicate that the disease is no longer as geographically restricted in terms of its global distribution. This re-emergence, according to guidelines co-author Abby Sage, VMD, DACVIM, underscores the importance of effective import control measures.

“Although Glanders was officially eradicated in the United States in 1934, it continues to be present in many countries throughout the world,” said Dr. Sage, Richmond staff veterinarian for the Virginia Department of Agriculture and Consumer Services. “We must remain vigilant through the USDA’s strict testing of horses at points of entry into the U.S. to prevent re-introduction of this disease.”

Prompt identification, euthanasia and appropriate disposal of all positive cases of the disease is critical to effective prevention and control of Glanders. Although antibiotic treatment of affected animals is employed in some areas of the world where Glanders is endemic, it is not the accepted option for most countries when dealing with an outbreak.

The Glanders Guidelines, available as a PDF file, were co-authored for the AAEP’s Infectious Disease Committee by Drs. Sage and Peter Timoney, the Frederick Van Lennep Chair in Equine Veterinary Science at the University of Kentucky’s Gluck Equine Research Center.

View the Glanders Guidelines or save them to your phone or tablet for future reference at aaep.org/sites/default/files/Documents/AAEPGlandersGuidelines.pdf. In addition to Glanders, AAEP guidelines for 19 other equine infectious diseases are available at aaep.org/guidelines/infectious-disease-control/using-guidelines.

The American Association of Equine Practitioners, headquartered in Lexington, Ky., was founded in 1954 as a non-profit organization dedicated to the health and welfare of the horse. Currently, AAEP reaches more than 5 million horse owners through its over 9,000 members worldwide and is actively involved in ethics issues, practice management, research and continuing education in the equine veterinary profession and horse industry.