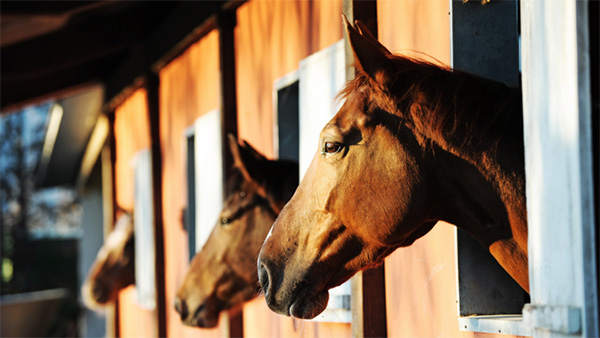 By: Cait Brown for Alltech

Ulcers — particularly those of the gastric variety — are one of the most hotly discussed and debated subjects among horse owners today. Performance problems? Must be ulcers. Attitude issues? Probably ulcers. Poor appetite? Have you checked for ulcers? You get the idea.

Equine gastric ulcer syndrome (EGUS) is a frustrating and potentially costly issue — gastroscopy (an endoscopic examination of a horse’s stomach) and treatment with omeprazole can cost upwards of $1,500. And the craziest thing of all? Ulcers are an entirely man-made problem; we have interrupted the horse’s natural environment and feeding/grazing regimen out of our own need for routine and convenience. Each of the following causes can lead you straight into Ulcerville, a place we would all much prefer to avoid:

Gastric ulcers are extremely common in performance horses — it is estimated that as many as 90 percent of racehorses and 70 percent of show horses have them. This problem, however, is not as black and white as it may seem. While some might think that the solution is as simple as skipping the expensive endoscopy and diving into treatment, just wait until the cost of medicine rears its ugly head; those tubes of omeprazole aren’t cheap, especially when you need 28 days’ worth. As someone who was most certainly not born with a silver spoon in her mouth, I can totally relate. You may have heard that powdered omeprazole is much cheaper, or that OTC rantidine (think Zantac®) can solve your horse’s problems for less, but the old adage that “you get what you pay for” is particularly fitting in this situation.

Let’s look at this from another angle: would you take medicine — a really expensive type — for something you weren’t even sure you actually had? Sounds insane, right? If you think your horse has gastric ulcers, call your vet to schedule a gastroscopy; it’s the only way to make a definitive diagnosis.

Did you know that Benjamin Franklin was actually talking about fire safety when he said, “An ounce of prevention is worth a pound of cure”? Still, his wisdom applies. Making a few relatively simple adjustments to your horse’s lifestyle and feeding schedule can greatly reduce its risk of ulcer development.

#1- Feed forage wisely. Horses are very large animals, but their stomachs only have a 2- to 4-gallon capacity. This may sound surprisingly small in relation to their size, but horses are built to spend two-thirds of their time grazing, as this allows them to digest a small but steady amount of forage throughout the day. Large amounts of saliva are produced during grazing, and when this saliva is combined with roughage, it can buffer the acid levels in the stomach. Even when a horse isn’t eating, its stomach is producing acid, and this is why prescribed meal times (e.g., feeding only twice per day) can be problematic: the longer a horse goes between forage consumption, the more acid accumulates. Feeding free-choice hay or allowing for extended turnout keeps a steady supply of buffering saliva available to neutralize stomach acid. Offering hay in a slow feeder can also help meals last longer. Alternatively, you may mimic grazing by breaking down daily rations into smaller, more frequent meals. Alfalfa often gets a bad rap, but it is actually thought to have a better buffering effect on stomach acids than grass hay. Alfalfa is far more nutrient-dense than grass hay, though, so it will need to be introduced to the diet gradually to reduce the risk of gastrointestinal upset.

#2- Limit grain. Horses produce less saliva when they consume grain, limiting the buffering effect that otherwise takes place when they consume forages. Grain and other concentrates increase blood glucose, which, in turn, increases insulin levels and volatile fatty acid production and could potentially damage the stomach lining. If your horse needs more calories outside of forage, look for a feed that has a lower starch and sugar content and is higher in fat and fiber. You will often see these diets referred to as low-NSC (non-structural carbohydrate). While non-structural carbohydrates are an important source of energy for performance horses who don’t have metabolic issues, they must be provided in the appropriate balance to avoid negative impacts and support optimal performance.

#3- Remember: we are dealing with creatures of habit. Humans aren’t the only ones who like routines. Anything out of the ordinary that adds stress to your horse’s life can contribute to the development of ulcers. This doesn’t just apply to show horses; even changing up the turnout group at home or feeding an hour later than usual can throw your horse into inner turmoil. Do your best to introduce change gradually and maintain as many familiar habits as possible. If introducing stress is unavoidable, take precautionary measures like feeding a well-researched gastric support product and/or strategically administering omeprazole.

#4- Provide more turnout time. As previously mentioned, horses are designed to be eating — and moving — almost constantly. As also noted, our interruption of this habit has led to the problems addressed in this article. Horses are among the most frustratingly fragile creatures on the planet, but don’t let a fear of pasture injury keep you from letting your horse be a horse. Provide ample turnout time — 24/7 is ideal, but this might not be realistic for many horses, so aim for as many hours per day as is reasonably possible. It’s also important to turn your horse out into a group, if you can. We need to remember that horses are very social creatures, who generally find solace in the company of other equines.

#5- Be careful with medication. When used long-term or in high amounts, some medications — particularly nonsteroidal anti-inflammatory drugs (NSAIDs) such as Bute (phenylbutazone) or Banamine — can damage the lining of the stomach, thereby increasing ulcer risk. Always check with your vet if you have any questions about the recommended use and dosage rate for these types of medication.

Ulcers may seem mysterious — and, in a lot of ways, they are. If we observe ulcer symptoms, we must ultimately trust our instincts, since there is no way to know exactly how much pain they cause our horses. Fortunately, as with many things, advances in equine medicine and management will only continue to develop our understanding of what we can do to both treat and prevent this common but distressing ailment.