A Match Made In Heaven – Kathy Tobin & VS Code Blue 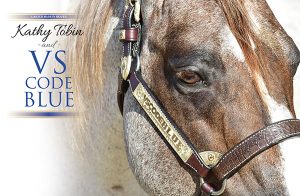 Every so often, fate smiles upon us to produce a natural specimen so exceptional that it’s in a class of its own. VS Code Blue is one such rarity. Combining the merits of careful breeding, devoted nurturing, and a little bit of DNA kismet, the little, roan colt has grown into a strapping mega-star gifted with exceptional conformation, lyrical movement, and natural charisma.

Kathy Tobin recognized those qualities in the colt by RL Best of Sudden and out of Vital Signs Are Good the first time she saw him when he was just a youngster owned by Donna Biddulph and in training with Karen Graham. She wanted to buy him, but he wasn’t for sale. VS Code Blue goes by the nickname, “Peyton,” aptly named for another gifted athlete, Super Bowl winning quarterback Peyton Manning. Tobin recalls her early impression of the talented, young colt and says, “Peyton was always so beautiful, and his movement matched his beautiful confirmation. He’s so flat legged! His mind always seemed so calm and nonchalant, and it’s the same as a breeding stud, too.” The colt was later sold to Jan Pittman and, in January 2020, Tobin had the good fortune of being able to purchase him, adding a Western powerhouse to her stallion roster that already includes the legendary Hunter Under Saddle multiple Congress and World Champion sire, Allocate Your Assets. Both stallions are now standing in Arizona with Jim and Deanna Searles.

Tobin has watched the colt’s career blossom, always hoping for a chance to own him. She says, “Peyton is a perfect blend of RL Best of Sudden and Vital Signs Are Good. His sire and dam were both my favorites and to have a combination of them both is priceless. With his parents’ beautiful movement and great minds, Peyton was destined to be a great performer. You never know how a stallion’s foals will be, but he’s stamping his foals with great minds and movement just like Allocate Your Assets has in the Hunt Seat world. That’s all any stallion owner can hope for. I still can’t believe I’m able to own him. It still seems surreal.”