A Fitting Tribute With One Final Win, Our Sincerest Condolences Following the Passing of Jerry Vawter 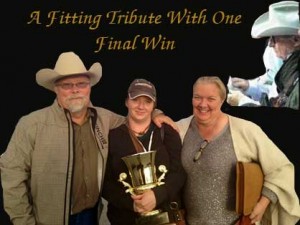 Steve, Sarah, and Kathy Headley following their win at the Breeders Halter Futurity.

It is with heavy hearts that we must relay the news that halter horse industry legend, Jerry Vawter, passed away over the weekend.

We remember, a time not too long ago, when Jerry was interviewed for an article in the 2006 edition of The Equine Chronicle. The piece was aptly titled In the Presence of Greatness, which outlined the brief histories of some of the industry’s foundational sires, such as King P- 234, Toby, Joker B., Leo San, Joe Cody, Poco Lena, Yellow Mount, Impressive, Conclusive, and finally the Vawter-bred Kid Clu.

Campaigned as a yearling and two-year-old with Denny Hassett, Kid Clu became a Reserve World Champion in his own right before going on to sire numerous World and Reserve Champions and point-earners and achieving the AQHA Leading Sire title in 1999, 2000, 2001. By reading Jerry’s words below, it’s easy to see that Kid Clu held a special place in his heart.

“Jerry and Gwen Vawter are no strangers to success in the show pen. They’ve accumulated 24 World and National Championships with their Quarter Horses and bred such noteworthy horses as Kid Silent, Sparkling Conclusion, Kids Classic Style, and Image of Kid. Jerry trained Gwen’s cutting horses and she was the ladies’ C.C.H.A. cutting horse champion in 1964 and 1965. Despite breeding a long string of notable sires and champions, ‘Kid Clu’ remains special to the Vawter’s.

Jerry ‘priced him like he didn’t want to sell him’ and Classic Acres in Ocala, Florida became the great stallion’s new home. Jerry and Gwen kept breeding to him until he passed in 2005.”

– Equine Chronicle 2006, In The Presence of Greatness

Over the weekend, one of the most prestigious halter horse events, the Breeders Halter Futurity and National Halter Championship, took place in Des Moines, Iowa. Among the many impressive horses in the field was a special animal named Alluring Intention, a mare bred by Jerry Vawter. In a fitting tribute, current owner Sarah Headley showed the mare to a win in the Amateur 2-Year-Old Mares class. Then, the pair went on to win the Amateur Champion of Champions class, one of the most highly anticipated classes of the show because it awarded a $25,000 check. Although he was nearing the end of his life, Jerry was able to receive word that the mare, he had bred and raised, was named a champion.

Sarah’s mother, Kathy Headley, posted a touching note on social media following her daughter’s win with the mare. “Kelli Stone told us that when she told Jerry’s wife that Alluring won, she told Jerry, who had been non responsive. He smiled. When he was told she won the Champions class, he smiled again. Thank you Jerry for raising such a nice mare. We will take good care of her. God bless your family in this difficult time. May the angels hold you gently in their arms.”

Our sincerest condolences go out to Jerry’s family and friends in the horse industry. We’d like to think that Jerry and one of his favorite horses, Kid Clu, are now reunited once again in heaven. As many in the industry will surely attest, we certainly felt like we were all In The Presence of Greatness while standing in the shadow of Jerry Vawter.