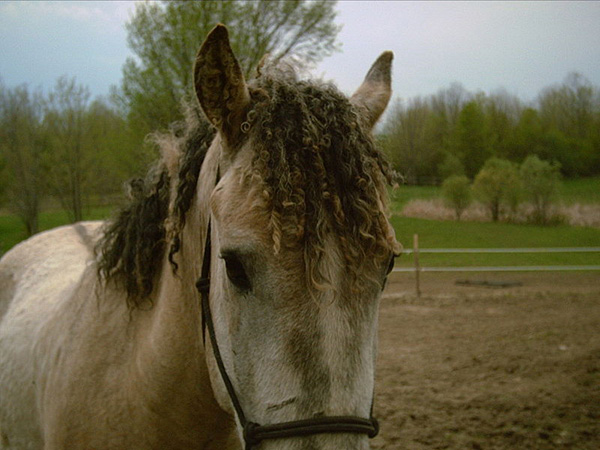 The actual origin of this breed is essentially completely unknown and is still being researched by enthusiasts. Sources and even breed registries and associations seem to disagree on the geographic area of origin of Curlies. Early artwork from Asia depicts curly-coated horses, Charles Darwin recorded his observations of them in South America in the 19th century, and Native American artwork shows them being used as mounts in the Battle of Little Bighorn. It is suggested that Curly horses may have Iberian ancestry. For this reason, it is highly debated which of these lines of Curlies are actually related to one another.

Modern Curly horses often have the build of an early Morgan-type horse. They are very hardy and have been known to survive extreme winter weather conditions. In addition to their coat texture variation, they display a wide variety of coat colors as well: all colors are seen including dilutes and Appaloosa and pinto patterns. Owners flaunt the easygoing disposition and intelligence of these horses, which makes them ideal to work with even as young horses and allows them to excel at any and all equestrian events.

As if the deal wasn’t sweet enough already, Curlies possess one more bizarre characteristic according to the International Curly Horse Organization: they seem to be the only hypoallergenic type of horse. Research has indicated that due to some sort of genetic factor, the hair of Curlies may be missing a protein that causes allergic reactions for people typically allergic to horses. However, a study on this has not been officially published. Regardless, many people who typically are unable to work with horses due to their allergies report being able to work with Curlies: a welcome relief! Perhaps this unconventional combination of traits will urge you to consider a Curly as your next equine companion.

Shelby Glessner is a graduate of Michigan State University’s Animal Science program. She spent an academic year working with renowned researcher Dr. Stephanie Valberg in the Equine Neuromuscular Diagnostic Lab at MSU’s College of Veterinary Medicine and has undertaken extensive science and equine related coursework. Passionate about education, she hopes to pursue a career advocating for research-based practices in animal agriculture.