A Christmas Tail in the Nick of Time! 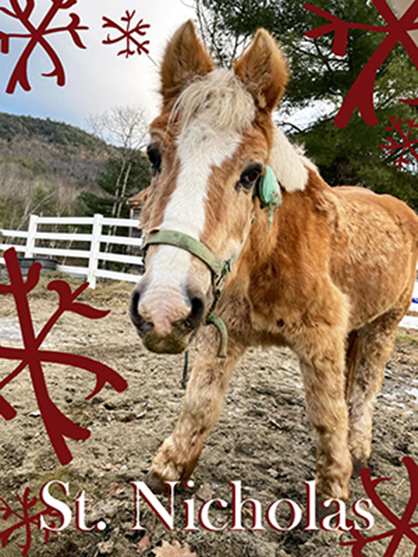 A win for accomplished show hunter, Lafitte De Muze, his famed rider, Amanda Steege, and generous owner, Cheryl Olsten, is also a win for another horse in need! As the founding member of the EQUUS Foundation Equine Ambassador program, Lafitte, Olsten, and Steege were the first team who felt that prize money could go further. EQUUS Foundation Equine Ambassadors donate a portion of their winnings in equestrian sport competition to make a difference to the many horses who are abandoned, abused, or forgotten in the United States.

Hoping to spark a movement for other owners in the industry to pay the deed forward, the team behind Lafitte has continued to pursue new ventures in an attempt to make an even greater impact for horses in need. 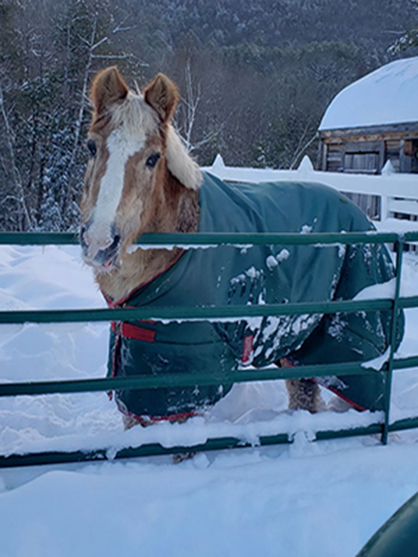 In 2020, Olsten approached the EQUUS Foundation with yet another inspiring idea to help the worst off in the industry – those that are sent off to be sold at auctions and, and when not sold, are transported over US borders for slaughter — and those numbers are staggering.

A horse directly helping other horses seemed a fitting idea for Lafitte’s gentle nature and ever curious demeanor. With the guidance of the EQUUS Foundation, Lafitte, Olsten and Steege saved their first rescue from a certain inhumane death. This holiday season, their generosity came to fruition in the form of a rescue of a Haflinger they named St. Nick. EQUUS Foundation Guardian, Gerda’s Equine Rescue in Vermont, was selected to ensure Lafitte’s first rescue was the right one.

“One of the most gratifying and heartwarming feelings,” said Olsten, is to know that Lafitte’s victories led to saving St. Nick and will lead to saving many more like him.”

“Lafitte De Muze truly is a special horse with a wonderful work ethic who gives his all,” Olsten explained. “I was taken with him and his eager spirit, and feel very lucky to be his owner. I wanted to celebrate that spirit, and what better way than to donate his prize money to a great cause. A horse helping other horses seemed appropriate, and being an ambassador for the EQUUS Foundation, gives me hope that the prize money he wins is going to help even more rescue horses like St. Nicholas from the horror that awaits them. We hope the message from our entire team behind Lafitte inspires others to do the same.” 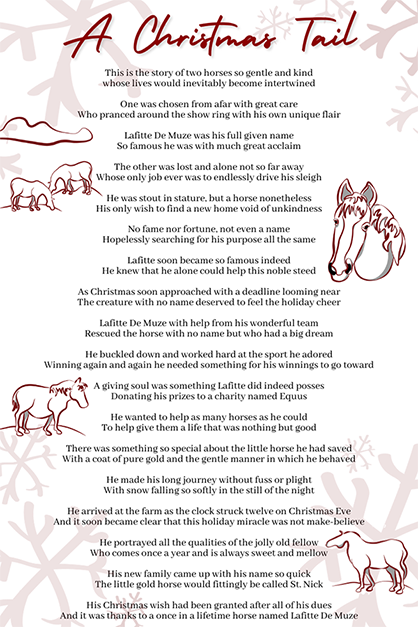 ABOUT EQUUS FOUNDATION: The EQUUS Foundation, a 501(c)(3) public charity established in 2002, is the only national animal welfare charity in the United States 100% dedicated to protecting America’s horses and strengthening the bond between people and horses. Donations are tax-deductible to the full extent of the law. Contact the EQUUS Foundation, Inc., at 168 Long Lots Road, Westport, CT 06880, Tele: (203) 259-1550, E-Mail: mail@equusfoundation.org, Website: www.equusfoundation.org.