A Boot in Both Worlds – Performance Industry Expansion into Barrel Racing 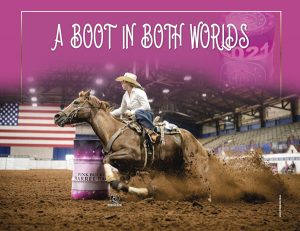 During Chad Beus’s childhood, the distinction between business and pleasure was clear; the family’s Utah dairy farm was business, and horses were a hobby. However, once he and his wife, Tiffany, were married, they made horses their business–particularly making a name for themselves in the Halter horse industry. Since then, he’s racked up many accolades and expanded into other performance events. Recently, he headed in a different direction by jumping headfirst into Barrel Racing. He started with the Pink Buckle Series with his business partner, Lance Robinson. With a $2.7 million payout, it’s the world’s richest barrel race.

“I don’t run barrels and never will,” Chad laughs, but he explains that his interest in Barrel Racing was born of some involvement in racehorses. “I’ve dabbled in the race horse industry for several years.  As the barrel horse industry is a secondary market for race horses, it’s been a natural progression for me. Also, many of my close friends in Utah are heavily involved in the barrel horse industry, and that has made it very enjoyable,” he says. “Besides the horses themselves, and the competition, I love the fact that it’s a timed event that has no subjectivity to it, which can be such a point of contention in the show horse industry.”

Chad’s experience with show horses uniquely prepared him for success in this Barrel Racing venture. As one of the founding members of the Breeders Halter Futurity, he understood what would need to be in place to make the series successful. Basing the series on the same stallion incentive model that he started with the Breeders Halter Futurity, he and Lance founded the Pink Buckle Barrel Race in 2018, and followed it with the Ruby Buckle Barrel Race in 2020. “It’s a model designed to give participating stallion owners a marketing advantage in the industry. During our first year, we paid out one million dollars. We’ve grown every year to the point that, in 2021, the Pink Buckle paid $2.7 million and the Ruby Buckle paid out $2.3 million,” Chad says. Beus says in 2022 the combined payout of the two races will reach $6 million.