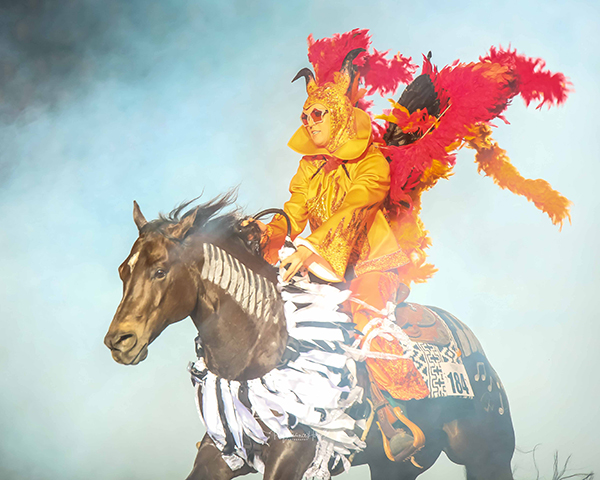 The crowd was hushed as an elaborately dressed figure strode through the fog into a packed stadium. Adorned with wings of fire, sparkling horns, and rose colored glasses, the performer paused for a moment as the first bars to “I’m Still Standing” rang out from the loudspeaker.

No, this wasn’t an Elton John concert. It was a very special performance that took place during the $25,000 RAM Freestyle Reining at the National Western Stock Show in Denver, Colorado. One of the highlighted events each year during the NWSS, the Freestyle Reining draws a huge crowd as horse and rider duos perform in elaborate costumes with intricate routines that are perfectly timed to music.

This year, Sharee Schwartzenberger pulled out all the stops for the 25th anniversary of the event to claim a big win aboard a 17-year-old horse named Game Day Surprise, aka “Eli.” Sharee has been named the Reserve Champion three times- 2014, 2015, and 2018- but this is her first win. In the past, she’s performed to Aerosmith’s “Dream On” as Steven Tyler and “Into The Night” by Santana. For this year’s Freestyle Reining, it was another spectacular musician that was the inspiration for her routine.

“I got the idea for my costume from the movie, Rocketman, about Elton John,” Sharee says. “But, I couldn’t find a song that fit what I was looking for. About a week before the event, I stumbled upon the “I’m Still Standing” version from the movie, and it was just what I wanted. The horse I used is a little slower and lazy, so I couldn’t do most of Elton’s versions, because they are fast from start to end. This version started out slow and then sped up and finished faster at the end. That way I wouldn’t wear my horse out or get him too tired at the start, and I could finish the routine with the more entertaining maneuvers like the spins and stops.” 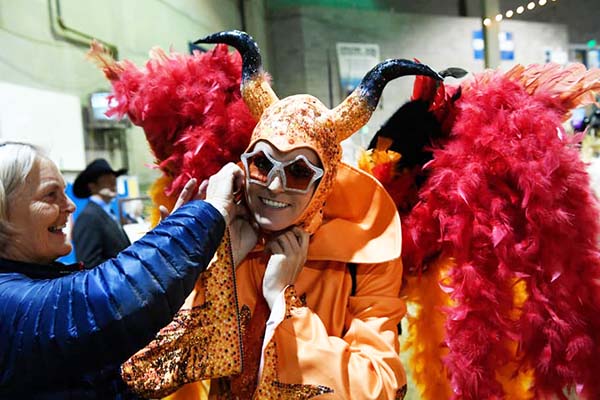 Once Sharee selected the perfect soundtrack for her performance, it was time to pick a costume. The flaming fire-bird seemed to be the obvious choice. “Once I got the song, I joked that if I was doing Elton that I might as well go big and do the crazy wing costume. I said it as a joke, but my parents said I should, so I started looking and was able to order the bodysuit costume quick. The wings took a while, but we got them together right in time. I wanted a showstopper outfit and one that would grab everyone’s attention.”

The most complex part of the costume were the large orange and red wings. For the construction of the three-foot tall feathered creations, she needed some help. “They were actually two separate sets of wings that my mom assembled together to make them big enough. Then, she added feathers and feather boas. They weighed enough that they wouldn’t stay up. On Sunday morning, my dad got out his power tools and somehow added some rods and bolts to make them stand up. We didn’t actually know if they would stay on. I just put them on right before I went in and hoped for the best.”

In addition to having some help with the costume, Sharee needed a full pit crew on the day of the performance. Also, Eli needed to get ready as well. Sharee’s friend, Kate Shockley, was on hand to paint piano keys and music notes onto Eli’s hip and neck. “I sent her pictures of piano keys and told her I wanted him to look like a piano. She showed up and just freehand painted him. She’s really talented and creative, so I knew that if anyone could make a horse look like a piano, and big enough for people in the stands to see, it was her!”

“Both my mom, dad, and sister were all there to help me get my costume put together before going in the pen. Several of my good friends and clients also came down and helped. It really was a group effort. My friend and fellow competitor, Angie Piccone, was a huge help getting the costume idea together, finding wings to order, and encouraging me to do it.”

Although the event is freestyle, there are some required maneuvers that must be included. Therefore, Sharee had to analyze the music and determine at which points she could insert sliding stops, spins, and lead changes. 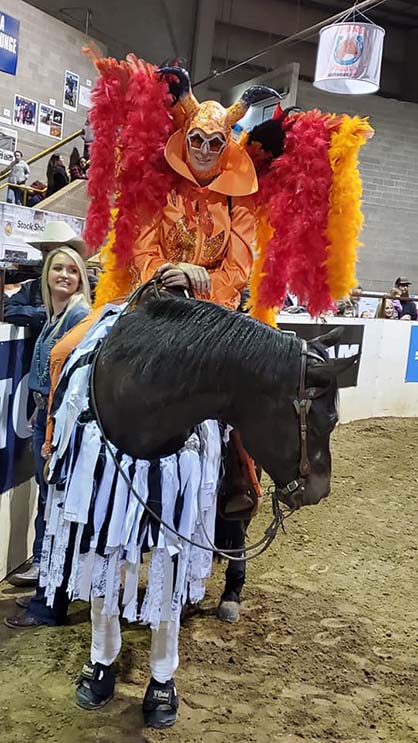 “NRHA requires a lead change in each direction, three sliding stops, and four consecutive spins in each direction, so those are the main things I made sure my routine had. For this specific routine, I really wanted a dramatic introduction to be fitting of Elton John, so I asked Maniac Productions, the production company for the event, if they had a fog machine. Also, I wanted it dark at the start when the music was slower and then the lights to brighten up when the music picked up. As far as putting together the music and maneuvers, I generally try to do my spins during guitar solo parts or during parts that repeat. I try to time the stops to the more dramatic parts of the song. I try to find songs that have different tempos and speeds, so I can go fast and slow to the music. Ideally, I like songs that have a dramatic ending so I can build up my pattern and then end it with a “BAM,” so to speak. I usually have a pattern drawn out, and I will only practice it once or twice and never at full speed. I don’t want my horse to learn the routine too well, because they might try to get ahead of me and guess what I’m doing instead of listening.”

Another important aspect of Sharee’s freestyle routine was her decision to ride Eli without a bridle. One might think that this technique would require a lot of practice at home. But, in Sharee’s opinion, it’s more important to ensure that her horse has foundational skills, while in a bridle.

“I owned Eli when he was a five-year-old and probably know him better than the back of my hand, so we have built a lot of trust between us. I know he will always stop, he usually rates really well to his stops, and he guides really well. Once in a while, I will take the bridle off at home and and just practice guiding him around, but I never practice bridleless in the show pen or before I go in. I always school him in a bridle to keep him correct, and then I just trust him to remain that way when I take the bit off. It helps that he has such a great mind and is so broke. I know I can do anything I want with him, so I always have a lot of confidence when I take the bridle off, and that’s a huge benefit.”

Making this victory even more special is the fact that 25 years ago, Sharee’s father, Steve, won the inaugural Freestyle Reining. During the night that Sharee finally claimed her own victory, Steve placed third after a five-year break from the sport. 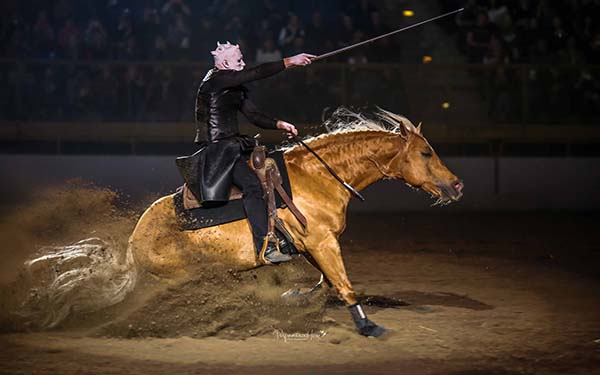 “It was really special to finally win the freestyle on the 25th anniversary, especially with my dad coming back to compete after taking five years off, and with him being the first one to ever win the freestyle. I was really excited when he did so well too this year. He’s always been there to cheer me on, and he knows how I’ve been disappointed when I get so close to winning. He just kept encouraging me to keep going out there and coming up with new and different ideas. He wanted me not to put so much pressure on it and just to have fun.”

“Probably the most memorable moment was after they announced the score, and I went back to the paddock. I was really surprised and touched by the reactions of not only my family but all the other competitors. Obviously, my parents and sister were there, but all the other competitors congratulated me, gave me high fives, and told me that it was about time. We have all competed against each other for so long, and they have watched me work at my routines and try and try to win. It was really humbling to see how excited they all were to see me finally achieve my goal.”

In addition to thanking the National Western Stock Show for inviting her to participate in the Freestyle competition, Sharee, would also like to thank Eli’s owner, Barnie Kurth.

“The Stock Show is always trying to improve. Every year, they come up with something new to help us connect with the crowd and to make this event stand out from any other one around the world. Like everyone says in their interviews, the crowd is so special at Denver, and it’s always my goal to come up with something new and unique to entertain them. Last, but definitely not least, I want to thank Eli’s owner, Barnie Kurth, for allowing me to ride her special boy! I’m so honored and cannot thank her enough for letting me borrow him for these routines.”

Ultimately, Sharee and Eli were rewarded with the title of Freestyle Reining Champion and a $6,750 check for their performance, which earned a score of 226. Coming in second was Dan James as the “Night King” from Game of Thrones with Don Magnum. This team was also the People’s Choice award winner.

Third was Steve Schwartzenberger with HollywoodMagicMike. Fourth was a tie between Bub Poplin with Another Whizkey and Shane Brown with Voodoo Smokin Annie. Sixth was Randy Dooley with Nite N Gail. Seventh was Jessica Dooley with Stary Night. Eighth was Aaron Ralson with Bud Lyte. Ninth was Drake Johnson with Lil Joes Lacy Lady. Tenth was Guy Vernon with Gotta Shiney Buckle. Eleventh was Pete Kyle with HA Spooky Tune. Twelfth was Angela Piccone with StopNForACocktail.