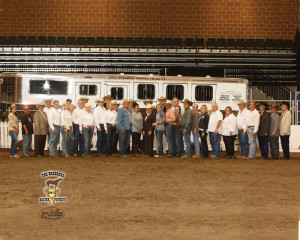 September is certainly a month dedicated to the halter horse industry. The Breeders’ Halter Futurity, World Conformation Horse Association Breeders’ Futurity, and the Big Money Halter Futurity all take place within a few weeks of each other. If you’re a conformation enthusiast, it’s a guarantee that you will find the industry’s finest Halter specimens and handlers at these world-class events.

“Solaris was bred and born here on our ranch,” Luke says. “He was a late colt, but we paid him up right away. We mapped out a plan and had a feeling that it would work out well. Thankfully, it did. It was one of those deals that works out the way you hoped it would,” Castle shares. “The attendance was really good at the show this year. The enthusiasm had definitely picked up since the year before. I think, every year, the show moves in a more positive direction. Overall, I thought the two-year-old classes were really deep across the board this year,” he says.

The 2015 BHF Two Year-Old Champion of Champions in the Amateur Division was Got My Sass On, a flashy mare owned by Keith and Rose Bode of Columbus, IN. The young mare is sired by My Intention and out of Fashions By Telusive.

When the BHF began, Ese A Looker, sired by Ecredible and out of Don’t Stare, took the first championship title in the Jr. Weanling Colts and Geldings class. Rick Leek led the young horse to victory for owners Steve and Kelli Jensen of Freeboro, MI. Ross Roark led Best Kept Secrete to win the BHF Sr. Weanling Colts and Geldings class for owner Robert Eurez of Pataskal, OH. The handsome colt is sired by Heza Secret Agent and out of Hush Don’t Tell.

OMG How Cool Am I was crowned champion of the Jr. Fillies class and was led by the highest placing Non-Pro Own-er/Breeder/Exhibitor, Taylor Licavoli, of Hazelwood, MO. The filly is sired by Very Cool and out of Conclusified Design. The Sr. Weanling Fillies division was won by the cleverly named HoneyOnYourBiscuit; she was led by owner Erin Jefcoat of Soso, MS. This filly’s sire is Cheer For Mocca, and her dam is Penomena Childhood.

Moving on in the yearling classes, the Yearling Stallions championship title was awarded to a stud colt sired by Mr Yella Fella and out of Phenomenal MS. Handler Buddy Laney led the young stallion, FG Phenomenal Fella. Gary and Linda Gordon of Roanoke, TX are the proud owners of the colt. Tim Finkenbinder led Shangri La to the Yearling Mares class championship. The mare is sired by I Gotta Cool Secret and out of Pretty Irresistible. She is owned by David Williams of Mansfield, TX. EZ Street took the top prize in the Yearling Geldings class with handler Ross Roark at the lead. The gelding, sired by Acoolest Touchdown and out of Eluse, is owned by Lorraine Wallinger of Stuart, NE.

The Two Year-Old Stallions class was won by the previously mentioned Champion of Champions Open Division winner, Solaris, owned by Luke and Abbi Castle. She’s Keeping Secrets, sired by I Gotta Cool Secret and out of Sheza Mini Clu, was crowned champion of the Two Year-Old Mares class. She was led to victory by Ross Roark for owner Robin Clover of Mead, CO. Ross Roark won a fourth championship title at the 2015 BHF with Fearles Fabien in the Two Year-Old Geldings class. The gelding is sired by Fearles and out of Sheza Storyteller, and he is owned by Clark Rassi of Aubrey, TX. 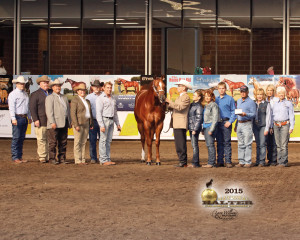 For the BHF youth classes, Isaiah Page led Intentional Ruby, sired by My Intention and out of Royally Fancy, to the Youth Mares championship. The mare is owned by Christopher and Amy Page of Buckner, MO. King Coolsified received another championship title by winning the Youth Geldings class with exhibitor Lawrence Cade Prime.

The BHF awarded $1.2 million in cash and prizes to the winners, and the show brought exhibitors from all across the United States. “I had never been to the show before this year,” says trainer and exhibitor Todd Grant. He said, “It’s an amazing event. There isn’t anywhere else that pays out that much money. It’s great for the industry. We did pretty well at the show, came back with some money, and inspired some of my other customers, who didn’t attend the show, to want to attend next year. We will definitely be back in 2016.”

Along with the cash awards, other prizes included gorgeous golden globes, bronze trophies, and floral neck ribbons. There were also a couple of horse trailers up for grabs. Trailers were presented to the High Point Exhibitor, Joy Stehney, and the Reserve High Point Exhibitor, Kim Anding. The ladies each received a year’s use of a horse trailer, thanks to Gary and Tammy Raak, owners of Twin Cities Featherlite and Twin Cities South Trailers.

Greg Holden, president of the WCHA, was extremely pleased with the way the WCHA Futurity went this year. Holden was happy to say that adding the Ranch Horse Riding to the show was well-received and it added a lot excitement. The event also had a calcutta one evening that brought in an impressive $9,600. “It’s just an overall, very nice futurity. I think that everyone had a good time and enjoyed the show this year. Of course, we’re always trying to find ways to increase numbers and entries. We gained a new sponsor this year, Lucas Oil and Protect The Harvest, which helped us a lot. We’re absolutely tickled to death to have them as our sponsors, and we certainly hope to grow with them,” he said.

There are no plans set in stone just yet, but Holden mentions that the WCHA Futurity may be looking to distance themselves a little further out from the Breeders Halter Futurity to give horses and exhibitors a little break. The committee is hopeful that this will help to increase their attendance and entry numbers.

“This was my first year to go to this futurity,” Erin says. “I hadn’t shown Halter in three years, so it was nice to come back and go to a fun show that paid so well. 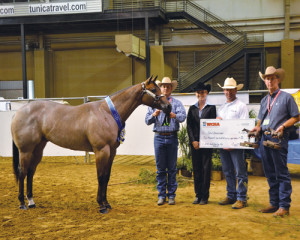 It meant a lot to me to be able to show two yearlings out of my dad’s stallion, Initials Only. Plus, it was great that they both did so well.”

There were also many other big winners at the WCHA Futurity and the Big Money Halter Futurity. It’s A First Down, led by Chris Arentsen, won the WCHA Open Yearling Stallion Futurity. His sire is Very Cool, and his dam is Tais Awesome Hilda. The young stallion is owned by Clifford Gerke. The WCHA Open Yearling Gelding Futurity winner was Ikon Scores, who is owned and was shown by Robin Robinett of Brazil, IN.

Billy Franks led TNR Top Of The Ninth, bred and owned by Suzonne Franks, to win the BMHF Weanling Colts and Geldings class. The colt is sired by The Home Run Kid and out of Top This Pizazazz. Suzonne led the colt to win the AQHA OBE Sr. Colt Futurity and WCHA Weanling Colt Futurity Colored Horse classes as well.

The WCHA Sr. Weanling Colt Futurity was won by Evolver, who was led by Julie Smith. Jason Smith of Whitesboro, TX is the owner and breeder of the colt that’s sired by Mr. Elusive and out of Last Touchdown. Mr Insurgent, owned and bred by Gene Parker, was led to victory by Kyle Parker in the WCHA Jr. Weanling Colt Futurity. The colt is sired by One Silent Clu and out of TE Stylin Too. HoneyOnYourBiscuit, led by Erin Jefcoat, won the WCHA Jr. Weanling Filly Futurity. The filly is by Cheer For Mocca and out of Penomena Childhood.

Showin Tell, owned by Marianne Williams, was the winner of the WCHA Non-Pro Colt Futurity with handler Mark Williams at the lead. The colt was bred by Steve Robinson, sired by Telasecret, and out of Forever Showin Off. The BMHF Weanling Fillies Class winner was Telerumor, sired by Telesecret and out of Mr. Made A Doll. Rebekah Herrmann led the filly to victory for owners Rich and Becky Herrmann.

Cool Play won the BMHF Yearling Colts and the WCHA Non-Pro Yearling Stallion Futurity classes with Scott Trahan, who owns the colt with his wife, Kelly. The young colt is sired by Very Cool and out of Sacreds Supreme.

Chilling was crowned the winner of the BMHF Yearling Geldings class with handler and owner, Bonnie Overbeck. The gelding’s sire is Very Cool, and his dam is GG Lodi Go Te.

Also running simultaneously with the WCHA Futurity and the BMHF was The Equine Chronicle WCHA Ranch Challenge, where Gotta Hot Gun won both the open and non-pro divisions. Riding the horse in the open class was Mozaun McKibben for Kelsey Flessner. Then, Kelsey climbed aboard to win the non-pro class. Over 30 entries participated in the inaugural challenge, which combined an all age, all breed, all gender Halter class that counted for 40% of the total score and the Ranch Riding portion that counted for 60% of the total score. Flessner also took the second place non-pro spot aboard Autum Play. Third place was Karen Johnson with GQH Summer Camp. Second place in the open class was Chele McGauly with Boonchex and Kismet. Third place was Mozaun McKibben with Lil Ruf Catalyst.

Based on the positive results from these events, it seems that September turned out to be a slam-dunk for the Halter horse industry.