10 Most Poisonous Plants to Horses in the US 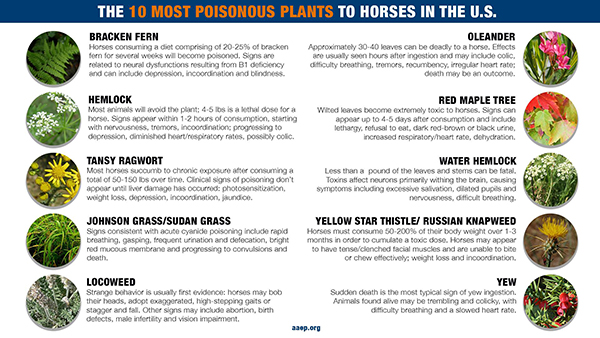 While the majority of poisonous plants pose little threat to horses because they are unpalatable, owners can unintentionally feed toxins to their horses through contaminated hay and grain, or by offering certain tree, shrub or grass clippings.

A 1,000-pound animal has to consume significantly higher quantities of a toxic plant than a smaller animal to be affected clinically, however some plants are cause for concern and all poisonous plants are worth recognizing so they can be removed from your horse-keeping areas. Another commonly overlooked reason a horse may become poisoned is allowing horses to graze a pasture after it has been sprayed with herbicide, but before the weeds have died and disappeared.

If you suspect your horse has ingested a poisonous plant:

• Remove the horse from the source.
• Contact your veterinarian immediately.
• Attempt to determine how much of the toxic plant was eaten and when it was eaten (small amounts of some toxins can be fatal in a short period of time while other require large amounts to be eaten over several weeks or months).

Prevent your horse from ingesting poisonous plants by learning the most common poisonous plants in your region, including the time of the year they are most palatable or toxic. As always, contact your veterinarian for more information and guidance!

10 Most Poisonous Plants to Horses in the US.

#1- Bracken Fern- Horses consuming a diet comprising of 20%-25% of bracken fern for several weeks will become poisoned. Signs are related to neural dysfunctions resulting from B1 deficiency and can include depression, incoordination, and blindness.

#2- Hemlock- Most animals will avoid the plant. 4-5 lbs is a lethal does for a horse. Signs appear within 1-2 hours of consumption starting with nervousness, tremors, incoordination, and progressing to depression, diminished heart/respiratory rate, and possibly colic.

#6- Oleander- Approximately 30-40 leaves can be deadly to a horse. Effects are usually seen hours after ingestion and may include colic, difficulty breathing, tremors, recumbency, irregular heart rate, and death may be an outcome.

#8- Water Hemlock- Less than a pound of the leaves and stems can be fatal. Toxins affect neurons primarily within the brain, causing symptoms including excessive salvation, dilated pupils, nervousness, and difficulty breathing.

#9- Yellow Star Thistle/Russian Knapweed– Horses must consume 50-200% of their body weight over 1-3 months in order to accumulate a toxic dose. Horses may appear to have tense/clenched facial muscles and are unable to bite or chew effectively, show weight loss, and incoordination.

#10- Yew- Sudden death is the most typical sign of Yew ingestion. Animals found alive may be trembling and colicky with difficulty breathing and a slowed heart rate.